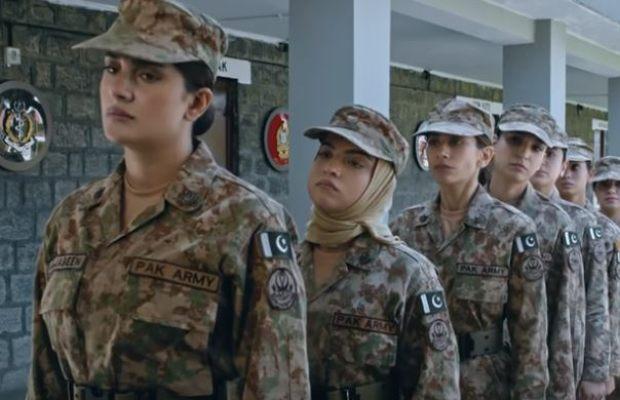 Sinf e Aahan the drama serial airing at ARY Digital is the most refreshing serial in the running. The ensemble cast has given power-packed performances in this episode. In the previous episode, we have seen the girls penning down inspirational letters to their families. This episode is all about Pariwash and Arzoo’s inspirational letters.

The episode begins with Pariwesh’s inspirational letter to her father. This letter is so far my favorite letter. It is much more than just being a personal letter it is highlighting deeper issues and in that letter, Pariwesh has raised solid questions about regional and ethnic differences. She asked that if there is only one nation, one flag, and one leader then why we have divided ourselves into so many groups on basis of ethnicity. Pariwesh tells her father that she is no longer just a daughter of Balouchistan, PMA has made her realize that she is now only the daughter of Pakistan.

Nathmy Perara too opens up with Rabia about her father. Her father dies in a suicidal attack and Nathmy Perara as a child was with him at the time of his martyrdom, we have seen a flashback where the little Nathmy with her own eyes sees her father getting shot. Nathmy shares her lifelong trauma with Rabia. Rabia has very warmly embraced Nathmy and their bond is getting stronger.

It seems that tension between Mahjabeen and Rabia has lessened at least from Mahajbeen’s side as when Rabia has given her speech Mahajabeen applauds her with an open smile. Pariwash has also given her speech in English. That gun shooting practice scene is too delightful. Major Osama and his wife’s relationship is also depicting the pain and the struggles through which a martyr’s wife goes through and also it is showing Major Osama’s sacrifice too as a husband whose wife is not yet ready to accept him.

Arzoo’s letter to her mother is yet another inspirational one but here I have a bone to pick with the writer that why she has shown that only here in PMA Arzoo first time feels safe as a minority and she also felt that she is justly treated like other people? In Pakistan, we as a society are also quite inclusive towards our minorities no? Anyways Arzoo most importantly feels the best as a minority in PMA. The best part of her letter is that she starts feeling liberated and empowered and she no more thinks of that flirty Nauroze.

tweet
Share on FacebookShare on TwitterShare on PinterestShare on Reddit
Rameeza NasimFebruary 14, 2022
the authorRameeza Nasim
Rameeza Nasim, a Paralian, passionate about poetry, drama and fiction. By giving drama critiques I feel like I am endorsing the writer's message to the audiences, I love my job. Being a critic responsibility lies on my shoulders to point out the flaws and shortcomings of the play be it on writer's , performers or director's end . I did my Masters in English Literature and Linguistics .
All posts byRameeza Nasim