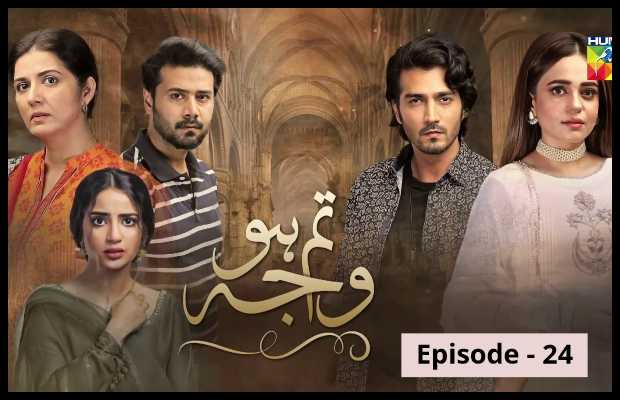 Tum Ho Wajah the drama serial running at HUM TV has on aired another episode. Poor Sitara comes to know that she is badly trapped in a huge mess created by none other than her own Chachu and Wajid Sahab. Chanda on the other hand is wondering where her family has gone when she sees her house locked. Performances are simply brilliant.

The episode begins when Babar’s wife meets Baber at the police station. There is a change of heart shown in Babar’s wife. she feels guilty about her past behavior and attitude towards her mother in law and Sitara, she begs forgiveness from Babar’s mother and Sitara. She also says good things about her mother in law in front of Chachu and also suggests him to make Sitara her daughter in law. It is so good to see Sidra’s transformation at least there is something positive shown in this play.

Chanda is wondering where her family has gone as she sees her house locked. She returns back to Shahab’s house but no one opens the door for her. She spends the whole night at the front door of the house lost in the memories of her father. Shahab is not accepting his wife but he is trying his best. Shahab’s mother is so greedy and typical that on the first day after their marriage she taunts Sana that nobody brought breakfast from her place and she also impatiently inquires from her about her dowry.

Poor Sitara has realized that she is trapped in a huge mess created none other by his own Chachu. The cunning and greedy chachu has made a deal with Wajid Sahab against getting Sitara’s house. He by trick makes Sitara signs on Nikkah papers. Poor Sitara has signed on some charity request papers when actually Chachu has placed Nikkah papers in that file. Well technically speaking such Nikkah has no standing, it is a void Nikkah where there is no will of a girl included in fact it is not in her knowledge that she is signing her Nikkah papers. Secondly, Nikkah does not take place without witnesses and the presence and the will of the girl’s guardian. Well, Chachu is so vile that he leaves Sitara at Wajid Sahab’s place with that void Nikkah papers. Sitara escapes from Wajid Sahab’s house.

Sana demands Shahab to divorce Chanda on which Shahab makes the excuse that he does not want to hear her name and he comes up with a lame reason that he is keeping her because her mother needs help! What a stupid and lame excuse is this! What kind of pathetic character Shahab is? He is blaming Chanda for his own sins and he is keeping her just because her mother needs help! This is simply disgusting. Sana is shown as a short-tempered girl she had a loud argument with Sahab and she also snubs her mother-in-law for interfering with her matters. It is so satisfying to see Shahab’s mother getting such kind of treatment she surely deserves a reality check.