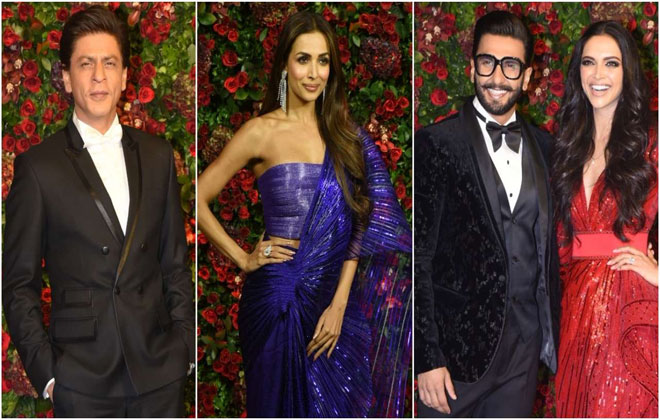 Bollywood superstars Deepika Padukone and Ranveer Singh had their third wedding reception in Mumbai on Saturday where bigwigs of B-Town graced the event with their presence. It was not just a star-studded affair but was also full of fun and frolic.

Being the enthu-cutlet that he is, Ranveer was seen dancing his heart out till wee hours of the morning. A video from the bash has made it to social media in which Ranveer Singh can be seen dancing to the beats of ‘Chaiyyan Chaiyyan’ song along with Shah Rukh Khan and  Malaika Arora. The original song too featured SRK and Malaika and this time, Ranveer joins them to bring the house down with his dance moves and crazy antics.

Ranveer Singh is a self-confessed fan of SRK. Earlier this year, when his portrayal of a negative character like Khilji in Padmavat was being likened to SRK taking up a negative role early on in his career in Darr, Ranveer had said,”I have been acting in films for about seven and a half years and from my very first film people have been drawing comparisons with Shah Rukh Khan. I don’t think there’s any basis for it. He’s a living legend! You can’t even take my name in the same breath as him. He has achieved and contributed to Hindi cinema so much. He is a game-changer in so many ways. Like I always say, even if I achieve an iota of all that he already has, I will consider that to be a genuine achievement.”