Game of Thrones – Why the Battle of Winterfell is the Biggest, Baddest, Epic Battle of All Times

SPOILER ALERT: Do not read further if you haven’t watched Episode 3 of Season 8 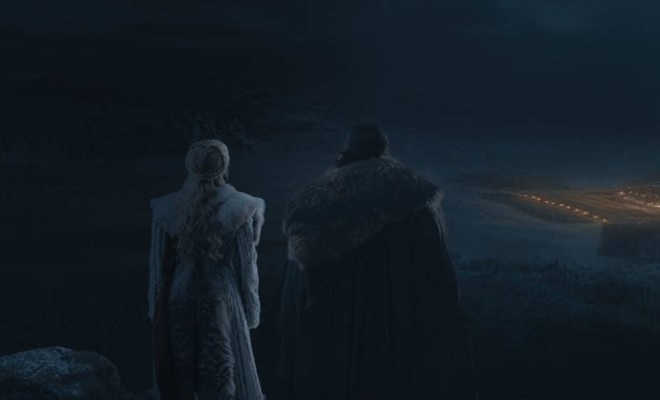 Albeit that fans of Game of Thrones are a bit divided regarding the latest episode with some feeling underwhelmed on how the most hyped battle of the HBO series didn’t live up to their expectations; many are still cheering on and rejoicing each moment they witnessed. Well to be honest we belong to the latter group, and apart from the low lightening – which was a pre-requisite for the episode – we are absolutely in love with the most EPIC battle of the most EPIC TELEVISION SERIES THIS WORLD HAS EVER SEEN! (Okay gotta tone it down a bit)

55 days to film, $30 Million to produce and the longest consecutive battle scene ever for TV & Film, Game of Thrones, Season 8 Episode 3 “The Long Night” was fucking incredible! Couldn’t keep my eyes off the screen! Wish I got to see it at the cinema! #GoT #GameOfThrones pic.twitter.com/QLdZ4oNmuU

So it all began at Winterfell as the army of the dead came down to take Bran’s life, and help the Night King achieve a never ending night. But there were Dothrakis, Unsullied, Northerners, Wildlings, 2 dragons and what not standing in between Night King and Bran. We all know what happened at the end so let’s not talk about it, but here are some amazing facts we all should know about why this Battle of Winterfell is the biggest and baddest battle of all time.

So as per a 27 minutes long ‘inside the episode’ posted by Game of Thrones official Facebook page, this particular episode was shot over a span of 11 weeks! That’s about 3 months approximately and never have we ever seen a single episode shot over this long span, nope, none.

It basically takes 30 seconds flat for the fire to disappear in the distance. This is the first moment of pure terror where those who haven’t fought the undead yet see what they’re really up against, and everyone else is reminded of their might. Stellar use of light. #GoT pic.twitter.com/PT9fgBevMY

In addition to the longest shooting spell record for a single episode, the episode 3 of season 8 had over 750 people on the set for this scene; this includes the cast, crew and every single person needed to create the masterpiece that we saw yesterday. Oh and the total cost of shooting and producing the battle episode was a whopping $15 million!

This is what went in, in addition to the blood and sweat and sleepless nights of cast and crew members – who shot from 6 pm to 5 am in -40 temperature everyday – to make this historic longest battle sequence of television history. It is also interestingly, the longest episode of Game of Thrones lasting for over 80 minutes!

Yes it was dark, but can we take a minute to appreciate the cinematography from last night's Game of Thrones? #GOT #BattleOfWinterfell pic.twitter.com/otQ9kLnf4s

So while some of us dwell over not getting a closure on Night King’s true motive, and some flabbergasted on how Night King could be killed so easily, we have to to know that this was indeed THE MOST EPIC BATTLE EVER SEEN ON TELEVISION! *obsessed fan alert*