Game of Thrones: Did Simpsons Make A Correct Prediction of Episode 5?

Spoilers ahead, if you haven't seen episode 5 of GoT Season 8, stop reading 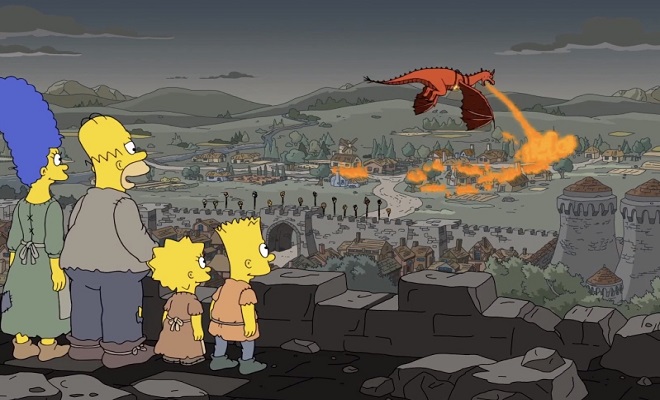 A rather spooky video bit from Simpsons that got viral recently, and the reason is its connection with the latest episode of Game of Thrones: The Queen of Ashes.

The clip that has surfaced on social media after the latest episode, shows a dragon pouring fire on a historic city – pretty much in a similar fashion of Daenerys burning down King’s Landing.

While some precedents have been set by the famous American cartoon, when it comes to prediction of real events — case in point Donald Trump’s presidency — this time the video has left a bit of confusion over its accuracy.

It is reported that the clip from the Simpsons is from an episode that aired in October 2017, namely The Serfsons. The episode – in its standalone context – was a subtle parody of Game of Thrones, Lord of the Rings and other such historical movies and shows.

It did in particular focus on the HBO most famous show’s theme, it seems unlikely that the episode came straight out the Simpsons imagination.

To validate the stance, an American site gave reference of season 7, episode 4 where Daenerys attacked Lannister army with her dragons and poured fire in a rather similar fashion, additionally Dany has burnt Meereen and other kingdoms before she proceeded to ‘Dracarys’ Westeros and King’s Landing.

So it is quite evident that the Simpsons clip – although holding resemblance with episode 5, season 8 – is not exactly a prediction the cartoon made two years ago. To add fuel to the fan theories though, it is a good idea.