And people are not happy with this news! 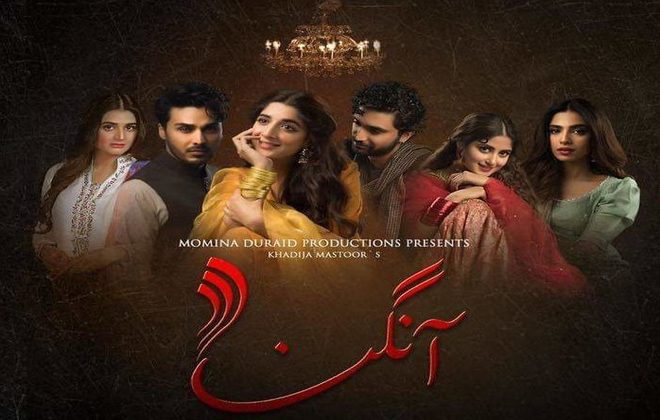 The immensely hyped drama serial finally made it to the screens on Hum TV last week in December 20, 2018. Ever since this drama serial was announced and its BTS, photos instantly became viral on the social media, there has been a lot of excitement surrounding it.

The first episode has set the bar high for the fans who were waiting eagerly to see this series. People can’t wait to see more of the stellar cast in the twinning love stories of Ahsan Khan, Sonya Hussyn, Sajal Aly, Ahad Raza Mir and Mawra Hocane. And see what else the story plot holds for its viewers in the store.

It was on Monday, when the network announced on their Facebook page that drama series Aangan will not be released on YouTube and it will only be aired on the Hum TV channel every Thursday.

“Thank you everyone for your overwhelming response on #Aangan. We would like to announce that you can watch your favourite drama serial only on your TV Screens. Watch Aangan on every Thursday at 8 PM only on #HUMTV”, said the post.

There is a reason behind this decision, as this drama series won’t be uploaded on YouTube like many other Hum TV dramas. According to our sources the Hum TV management is being approached by various web portals to acquire the copyrights for the Aangan series.

In this regard the official announcement by Hum TV is being awaited and TV station will be airing new episode on a weekly basis.

This decision was not welcomed by many of the Hum TV fans. As, many fans have taken it to social media to share their views.

@Humtvnetwork Seriously? You share all the trashy drama episodes on YouTube and then come out with a new “marketing strategy”? Real classy. Plesse don’t bother coming abroad for your award shows again. Us pardesi folk ain’t having it. #Aangan

The entire year around, Hum TV creates sucky shows. When they actually end up creating something good then they decide not to upload it anywhere because it's that good. It's their only show that has a star studded cast. They just want to make more money by Netflix.#Aangan