“Simpson’s character Apu was the reason for me being bullied in school,” Priyanka Chopra 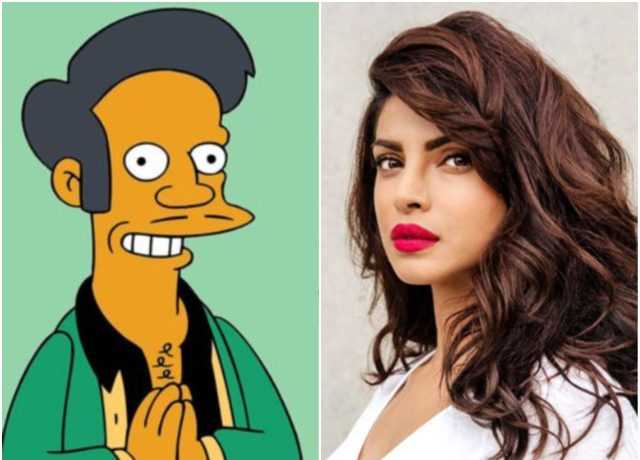 Priyanka Chopra aka Piggy Chops in one of her recent interviews talked about school bullying and her personal experiences. During the interview PeeCee revealed that she was bullied at school because of the Indian stereotyped character Apu in the Simpson’s cartoon.

The Bollywood diva blames Apu  by saying “Apu was the bane of my existence, growing up,”  during her high schooling days in US.

“I was always asked when I was in high school — like at 14, 15 — why I didn’t speak like that or… did I find gold in my rivers? Did we go to school on elephants? I always had questions like that,” tells Priyanka Chopra during her interview on The View.

Last year the Indian character Apu Nahasapeemapetilon triggered a conversation on the representation of Indians on the show. It was followed by comedian Hari Kondabolu releasing a documentary, The Problem with Apu in which he interviewed celebrities of South Asian descent about the character Apu from the cartoon series.

Well Priyanka believes that it is the responsibility of its creators to evolve with time. “Yes, it’s a cartoon, yes it’s a pop culture, super successful show, but that gives it more responsibility, It is out of date and [has] not evolved on so many levels.” said the Bollywood actress.

She further added, “The population of Indian-Americans in America has tripled… so the voice is louder, the representation and the demand for representation for people of color is louder”.

tweet
Share on FacebookShare on TwitterShare on PinterestShare on Reddit
Rameeza NasimMay 9, 2018
the authorRameeza Nasim
Rameeza Nasim, a Paralian, passionate about poetry, drama and fiction. By giving drama critiques I feel like I am endorsing the writer's message to the audiences, I love my job. Being a critic responsibility lies on my shoulders to point out the flaws and shortcomings of the play be it on writer's , performers or director's end . I did my Masters in English Literature and Linguistics .
All posts byRameeza Nasim