Shaping the Future of Journalism by Strengthening Accountability and Content Diversity 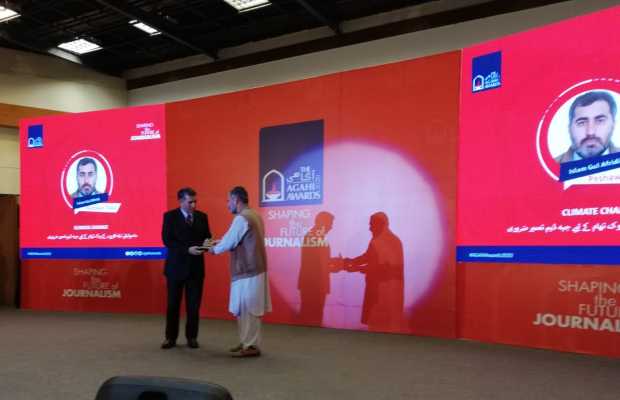 Pakistan’s most prestigious and sought-after journalism recognition, the AGAHI Awards, recognizes 43 journalists for media excellence and ethics. The AGAHI Awards in its Eighth year received thousands of submissions in more than 40 categories from across the country. A jury of national and international experts, development specialists, academicians, and media professionals, evaluated the submissions made by journalists from print, television, radio, and online media.

The AGAHI Awards are the annual event in Pakistan to benchmark journalism excellence in Pakistan, recognizing courage and commitment showcasing outstanding contributions of journalists from across the country. Over the years, the winners have produced work, often in the face of political and economic pressures sustaining public trust in the media impacting the lives of people all over the country.

Puruesh Chaudhary, President AGAHI and the co-founder of the AGAHI Awards in her keynote address said, “the AGAHI Awards is a commitment to promote ethical journalistic practices for safeguarding public interest. The Awards encourage journalists to use the AGAHI Awards evaluation criteria, to gauge their content to be unbiased, balanced, and accountable. This year we have seen the dramatic rise on the use of technology in education, health, information communications; however, we need to equally reflect on the importance of human expression and media freedom, both fundamentally critical to our collective evolution.

Amir Jahangir, Chief Executive Officer, Mishal Pakistan and co-founder, AGAHI Awards, shared his vision for creating the awards and said “the media in Pakistan is transitioning from passive consumption to an interactive model, this transition is not only confronting media sustainability but also creativity and skillset challenges as well. This change is also exposing media to be exploited by both the state and non-state actors for information laundering. We must collectively ensure the journalists and content creators have freedom and independence to work in an environment that supports fairness, truth, and accountability in Pakistan.”

Speaking on the occasion, Moonis Abdullah Alvi, Chief Executive Officer, K-Electric, said “K-Electric is the company which adds value to millions of citizens daily. We are happy to be partnering with these Awards and would like to announce today, that in collaboration with the AGAHI Awards, a media fellowship program will be developed. The Fellowship program will be designed with the help of the journalists to build a better understanding of journalists on key policy and implementation issues faced by the energy sector in Pakistan”. He further said, “we believe that the future of energy in Pakistan is bright and we would like media to be part of this journey, so we create more value for the citizen of this great nation”. The Fellowship program will capacitate the journalists across media for better understanding on public policy options, implementing challenges and consumers’ point of view from an unbiased perspective”. He said, “we are confident that this initiative will be a milestone for both the media and energy sectors in Pakistan.”

The objective of AGAHI Awards is to r­ecognize and appreciate the best journalistic practices in the country, creating a healthy competition within the media industry, encouraging ethical and professional reporting practices that can create a pluralistic information space for citizens to access to impartial information, that can be trusted. The stories nominated for the AGAHI Awards are evaluated on a criterion developed by AGAHI on the basis.

The AGAHI Awards received an overwhelming response from the journalists’ community – reaching more than 5 million Pakistanis through social media for the Peoples’ Choice Awards categories to select the “Favorite News Channel of the Year” and “Current Affairs Anchors of the Year” in Pakistan. Big data and sentiment analysis were also conducted in tandem to measure the responses for the people’s choice award categories.

The following journalists are the winners for the “Journalist of the Year 2020, Reporting On:

In the People’s Choice Awards categories:

The Founders’ Choice Awards for:

The cause of journalistic integrity is further harnessed by the AGAHI Awards, which are sponsored by many reputed organizations that believe in the cause of promoting ethical and professional journalism based on tolerance and accountability. This year RINSTRA, K-Electric, Nestle, and China Pakistan Study Center, ISSI played an integral part in Shaping the Future of Journalism as partners for the AGAHI Awards 2020.

The event was a splendid aura of diplomats, ambassadors, opinion and policymakers, journalists, and youth coming together to not just honor journalists but also celebrate Elimination of Violence Against Women Day. The event was concluded with musical performances and concluding remarks from the founders.

The AGAHI Awards are an annual award series for journalists across Pakistan. These awards provide a platform to celebrate and recognize the work of credible and dedicated journalists. AGAHI Awards were inaugurated in Pakistan for the very first time in March 2012; since then, the awards have become the essence of several media development initiatives in Pakistan. The Awards are organized in collaboration with local and international media bodies, regulatory authorities, the private sector, and other stakeholders.

The objective of these Awards is to recognize and appreciate best journalistic practices in Pakistan, creating a healthy competition within media, encouraging ethical and professional reporting practices. Through this initiative, AGAHI Awards team has been very successful in bringing together government, media development institutions, press clubs, academia, and the private sector with an interest in improving the state of media in Pakistan.

The AGAHI Awards plays an instrumental role in promoting diversity and best practices. Every year AGAHI and Mishal Pakistan in collaboration with multiple stakeholders jointly nominate national and international leading opinion-makers, development experts, media gurus, and knowledge professionals to be part of the judges’ panel to evaluate the entries.