Here are the highest grossing Bollywood films of all times 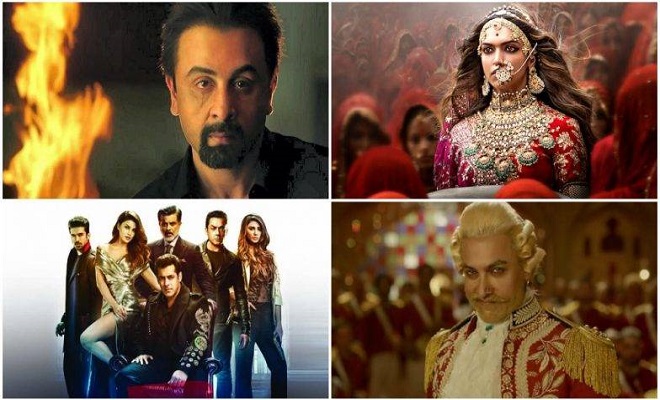 2018 proved to be a rather successful year for films in Bollywood. A number of films crossed the 100 crore mark within a few days of their release and wowed the audience owing to their amazing content and brilliant onscreen performances of various actors.

Here we bring you the highest grossers of Bollywood from the year 2018;

The film revolved around the life story of Sanjay Dutt and had Ranbir Kapoor in the lead. Sanju was directed by Rajkumar Hirani.

Sanjay Leela Bhansali’s Padmavaat starred Deepika Padukone, Shahid Kapoor and Ranveer Singh in an epic tale of Rani Padmavati and set screens on fire with its larger than life canvas.

Another addition to the Race franchise, this Salman Khan starrer had Jacqueline Fernandes, Bobby Deol and Anil Kapoor in pivotal roles.

A sequel to the 2016 hit film Baaghi, this action thriller starred Tiger Shroff and Disha Patani and impressed audience and critics alike in India and globally.

Aamir Khan and Amitabh Bachchan came together on screen for the first time in this Vijay Krishna Acharya’s directorial. The film presented a larger than life picture of freedom fighter Azaad and a pirate (thug) Firangi Mallah.

And although Badhaai Ho coulnd’t beat the top listed films in terms of number, the film did deliver some solid comedy and great performances, earning a total of ₹208.2 crore on the global box office.

And while we have brought you the list for now, we still need to see how the Shahrukh Khan starrer Zero, the recently released Akshay Kumar and Rajnikanth starrer 2.0 and the upcoming film Ranveer Singh starrer Simmba, fares at the box office.