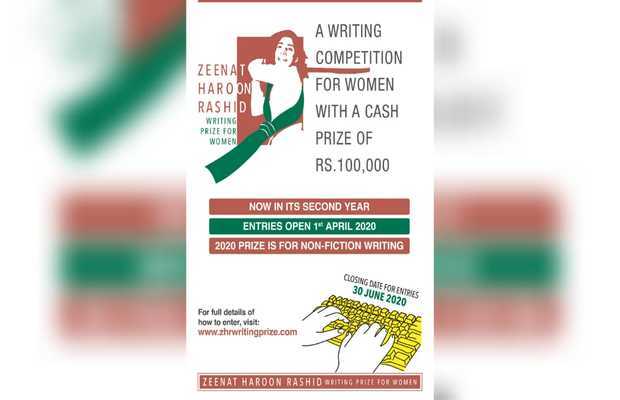 After a phenomenally successful inaugural year, which saw the submission of nearly 500 pieces of writing from every corner of Pakistan, the Zeenat Haroon Rashid Writing Prize for Women returns with a call for submissions from April 1st, 2020.

This annual writing competition, which carries a cash prize of Rs. 100,000 was established last year to honour of the memory of Zeenat Haroon Rashid, a founding member of the Women’s National Guard and Muslim League activist during the Freedom Movement.

The Competition asks women to submit writing on the theme of WOMEN AND PAKISTAN and this year the call is for NON-FICTION writing (memoir, biography, narrative or polemical essay). The writing may be as immediately topical or as eternally timeless as the author pleases and, as always, the judges will look for writing with a strong personal voice. The Competition is open to all women of Pakistani nationality or Pakistani heritage over the age of 18.

In 2019, the award and cash prize was won by Maham Javaid for her short story THE TALLEST WOMAN. A Special Citation was also awarded to Saadia Khatri for her memoir, FEAR, AND THE CITY. Both these women had the honour of having their writing published in a national newspaper. All featured writing is now available to read on the website. 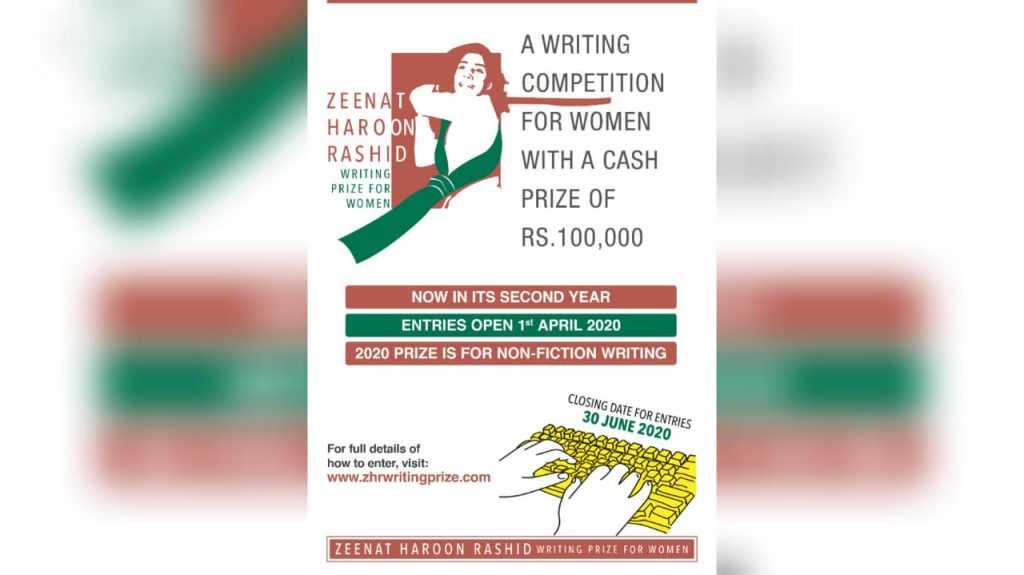 The judging panel for 2020 includes a stellar list of renowned writers, editors, and journalists:

• Maleeha Lodhi. Hilal-e-Imtiaz. Diplomat, Academic, Author, and Editor. Among her many accomplishments, Maleeha has also served as editor of The Muslim and was the founding editor of The News. She is the author of two books, Pakistan: the External Challenge and Pakistan’s Encounter with Democracy and editor of a third, Pakistan: Beyond the Crisis State

• Alice Albinia. Author and Journalist. Her first book Empires of the Indus: The Story of a River was awarded the Jerwood Award for Non-Fiction by the Royal Society of Literature in 2005 as well as the Dolman Travel Prize and the Somerset Maughm Award in 2009. Her debut novel Leela’s Book (2012) is a re-telling of the Mahabarata, set in modern Delhi where she lived and worked as a journalist for two years.

• Ahmed Rashid. Author and Journalist. An award-winning Pakistani journalist. Ahmed is the author of six books: The Resurgence of Central Asia (1994), Taliban (2000), Jihad (2002), Descent into Chaos: The US and the Disaster in Afghanistan, Pakistan and Central Asia (2008) and Pakistan on the Brink: The Future of America, Pakistan, and Afghanistan (2012). He writes widely for international newspapers, currently the Financial Times and the New York Times. He is a founding director of the Lahore Literary Festival.

• Homa Khaleeli. Editor and Journalist. A journalist based in London, Homa is the joint deputy features editor of the UK’s Guardian newspaper. She writes for The Guardian on a variety of subjects with a special focus on women’s issues and Muslim culture.

• Shan Vahidy. Editor and Granddaughter. Having worked for several years at Penguin Books, Shan is now a freelance editor working in London. She is the granddaughter of Zeenat Haroon Rashid and a permanent co-ordinating judge on the panel.

Full details on how to enter and comprehensive competition rules can be found on the website.

tweet
Share on FacebookShare on TwitterShare on PinterestShare on Reddit
Saman SiddiquiApril 3, 2020
the authorSaman Siddiqui
Saman Siddiqui, A freelance journalist with a Master’s Degree in Mass Communication and MS in Peace and Conflict Studies. Associated with the media industry since 2006. Experience in various capacities including Program Host, Researcher, News Producer, Documentary Making, Voice Over, Content Writing Copy Editing, and Blogging, and currently associated with OyeYeah since 2018, working as an Editor.
All posts bySaman Siddiqui