10 Pakistani soldiers lay down their lives for regional peace 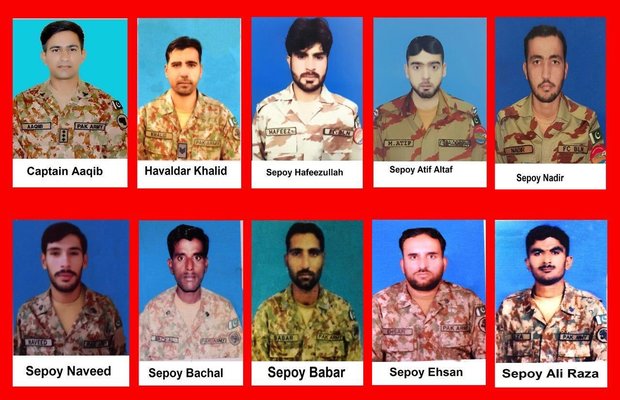 Nation salutes the to the 10 valiant soldiers who embraced martyrdom in two separate terrorist attacks along the Pak- Afghan border on Saturday.

Pakistani forces work to sustain peace and improve security situation in the tribal areas, however the hostile forces are attempting to destabilize the province of Baluchistan and tribal areas.

Nation pays tribute to the martyred Army Personal who laid their lives for making peace in the region.

I salute our armed forces personnel who continue to lay down their lives fighting terrorists to keep the nation safe. My condolences & prayers go to the families of the10 brave soldiers, including an officer, martyred fighting terrorists in North Waziristan & Balochistan today.

The nation is indebted to the 10 valiant soldiers who embraced martyrdom in two separate terrorist attacks along the Pak- Afghan border today. Their sacrifice along with the sacrifices of thousands of our soldiers continues to fortify our resolve to defeat terrorism.

Shahadat of 6 sldrs on Pak-Afg Bdr & 4 in Bln is the sacrifice Pakistan making for peace in the region. While security of tribal areas has been improved with efforts now focused to solidify border, inimical forces are attempting to destabilise Bln. Their efforts shall IA fail.

“Salute to martyrs & families.We shall ensure defence & security of motherland at the cost of our sweat & blood.These are dying efforts of frustrated inimical forces while Pakistan moves from stability to enduring peace. It’s time for the world to facilitate regional peace”,COAS.

The martyrdom of 10 soldiers today – 6 in North Waziristan & 4 in Balochistan – is a constant reminder not only of the sacrifices these brave men make as they battle terrorists but also of the terrorist threat that continues from across our borders as well as from within.

The sacrifice of our brave soldiers is invaluable and will always be remembered by all Pakistanis. May Allah bless their souls and give them jannat. Our resolve as a nation will never waver against enemy of any size or might! Pakistan Zindabad https://t.co/kwPXwu6eZc

According to the Inter-Services Public Relations (ISPR), the first incident of terrorism took place at the border area of North Waziristan.

Six Pakistan Army personnel were martyred when terrorists from across the Pak-Afghan border opened fire on the soldiers patrolling the border Gurbaz area of North Waziristan tribal district.

According to ISPR in the second incident, four Frontier Corps personnel, including an officer, were martyred when terrorists opened fire on them near Turbat.

The attack took place when the FC Balochistan troops were carrying out a combing and sensitization operation between Hushab and Turbat area.