Its a classic case of the corporate interests ruining the business! 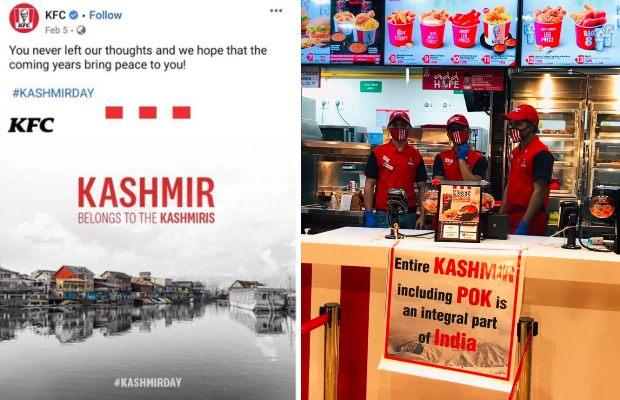 #BoycottKFC has been trending on social media timeline in Pakistan over KFC India’s claims on Occupied Kashmir!

Following the reports that the fast-food chain KFC in India has displayed a banner in response to the KFC Pakistan’s Kashmir Day’s post.

#BoycottKFC started trending online as netizens are expressing displeasure on viral images of the KFC India outlet showcasing banners with claims that the entire Kashmir belongs to India.

Kashmir including POK is an integral part of India – #KFC. Surrendered. 😂#BoycottKFC pic.twitter.com/vzFvnQNqkp

Adding more to it, the Indian joint of the chain had also issued an official apology after the brand faced the ire of Indians over Kashmir Day’s post.

I appeal to the centre & all the state govts to take serious action against all the @KFC_India outlets and ask them to shut their outlets .
They have no right to do buisness in India. #BoycottKFC pic.twitter.com/6CugpmjI7h

KFC India in a tweet said,  “We deeply apologize for a post that was published on some KFC social media channels outside the country. We honour and respect India, and remain steadfast in our commitment to serving all Indians with pride.”

We deeply apologize for a post that was published on some KFC social media channels outside the country. We honour and respect India, and remain steadfast in our commitment to serving all Indians with pride.

For the past month, Indians have been targeting international brands in their country as their Pakistani counterparts issued messages in solidarity with the Indian Occupied Kashmir on Feb 5.

February 5  is celebrated as Kashmir Solidarity Day every year in Pakistan.