US state of Southern California has been rattled by an earthquake of 7.1-magnitude, the strongest in two decades.

The tremor shook buildings and cut power supplies in parts of Los Angeles but did not cause any major damage or deaths, according to the officials.

The quake was 11 times stronger than the 6.4-magnitude quake “foreshock” the previous day, according to the United States Geological Survey. 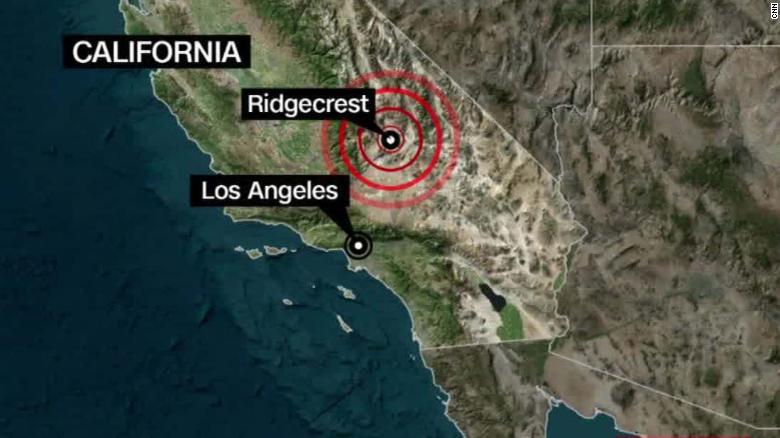 The two major quakes, along with multiple aftershocks, have revived fears of the “Big One”, a powerful tremor along the San Andreas Fault that could devastate major cities in Southern California.

The fire department deployed vehicles and helicopters to check on damage and residents in need of emergency aid.

Several videos and images are being shared on social media which captured the powerful, preliminary 7.1 magnitude earthquake, which shook areas in Southern California, Nevada, and Mexico on Friday evening.

.@OrlandoMagic and Spurs play through the effects of the 7.1 magnitude earthquake that just struck central California. The other Summer League game in Las Vegas is suspended. pic.twitter.com/aLWbOkORfd

BREAKING NEWS- NEW IMAGES COMING OUT OF HIGHWAY 178 IN KERN. SHOWING A 4 FT WIDE FISSURE ALONG WITH A ROCKSLIDEs IN THE ROADS BECAUSE OF THE 7.1 MAG QUAKE.#178HWY #KERN #earthquake #anotherearthquake pic.twitter.com/1puCE2AIy1

#Earthquakes at #disneyland means a ride I didn’t have to wait in line for! #CantFastPassThisExperience pic.twitter.com/imTIT9JIvf

7.1 magnitude earthquake 150 miles away in Ridgecrest, Ca. This is in my 6th (very top) floor apartment in Glendale, Ca. Turn your volume on for the full effect! #earthquakes #earthquake #EarthquakeLA #earthquakecalifornia @earthquakeBot @USGSBigQuakes pic.twitter.com/ZCokTSHvgM

According to The Los Angeles Times, the earthquake was the largest in southern California since 1999 when a 7.1-magnitude earthquake struck the Twentynine Palms Marine Corps base