The blast that took away eight lives, has saddened the entire nation 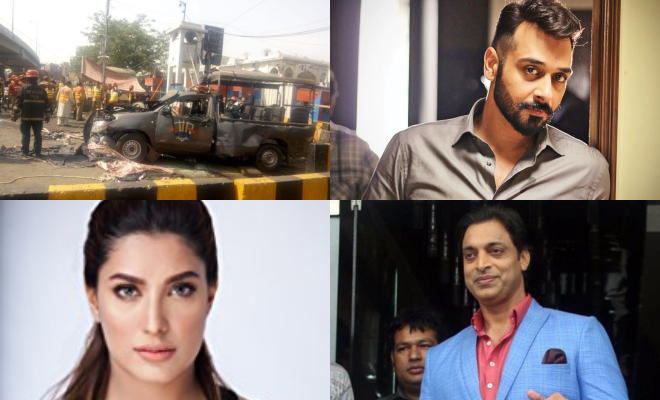 Yesterday morning the streets of Lahore were terrified with the aftermath of the suicide blast that took place outside the ladies gate of Data Darbaar Shrine. A young suicide bomber blew himself up near a van of Elite Force, as a result eight innocent lives were lost and as many as 20 people got injured.

The shrine home to the spiritual personality Data Ganj Baksh is one of the most sacred places in the city, and visitors from all over the country pay homage to the great Sufi saint by going there. After the deadly blast, many felt aggrieved and some celebrities took it to social media to condemn the attack and pray for the country’s peace in the Holy Month of Ramadan.

Tamgha Imtiaz recipient and acclaimed actress Mehwish Hayat took to Twitter and shared her concern over the inhumane act.

Absolutely devastated by the news from Data darbar Lahore . Since when have we become such animals with no regard for human life ?! #lahore #yehhumnaheen

Musician Umair Jaswal also came out in support of the victims and condemned the attack. In his Tweet, Umair sent prayers for the deceased and their loved ones.

I condemn the suicide attack that happened in Lahore outside #DataDarbar today. Extremely saddened to hear about the loss of innocent lives, may Allah grant patience to the families of the victims of today's incident. pic.twitter.com/WNWWAazu0P

Former fast bowler of Pakistan cricket team Shoaib Akhtar also expressed his grief on the incident, he too sent regards to the victims’ families.

Deeply saddened to hear about the suicide blast outside the Sufi Shrine of Hazrat Ali Hajveri, Data Darbar.
Prayers & thoughts with the affected families.

Prayers for Pakistan prayers for lhr very sad to hear the news of the blast at data darbar..