A hashtag #ReleaseAllStudents started trending on Twitter for the immediate release of the students. 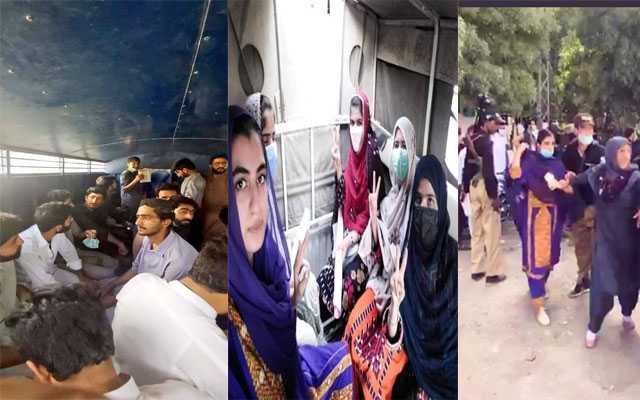 As many as 70 students have been arrested by the police in Quetta after they tried to reach the chief minister’s house on Wednesday, demanding access to the internet for attending online classes.

As being reported, the students belonging to Baloch Students Committee have been staging a protest for the past three weeks protesting against the online classes and provision of internet services.

The activist and student leader belonging to the Baloch Students Committee, Mahrang Baloch was also among those who were arrested by the police.

“I am arrested along with other peaceful students,” she said in a video on her Twitter handle hours ago, adding that, “we were protesting online classes.”

As soon as the video of students’ arrest was uploaded on social media, it stirred the storm, and internet users showed their anger against the authorities calling it a “shameful act”.

Hashtag #ReleaseAllStudents started trending on top on the micro-blogging website Twitter for the immediate release of the students.

A protest is something we have a democratic right to. It’s a shame that we as a free nation, are not even allowed to raise our voices against something that bugs us. It’s a real shame.#ReleaseAllStudents pic.twitter.com/A2Lc8lUGh2

I strongly condemn the arrest of students who were demonstrating peacefully for their rights.
Students are the assets and the future of any country#ReleaseAllStudents #SPSF pic.twitter.com/HX5OPY2yvR

Zamin Hussain Zaman, a police constable at Quetta’s Civil Lines police station said that students attempted to hold a demonstration in the city where all gatherings are strictly prohibited.

“The arrested students have been shifted to different police stations,” he said.

Opposing the decision of online classes, some students said that there are some areas in the province where internet services are not even available and they cannot attend the study sessions.

The arrest of the students in Quetta have also condemned by the human rights activists demanding for their release.

“We demand the chief minister of Balochistan ,Jam Kamal  for the immediate release orders of all the students,” Jalila Haider, a human rights activist in Quetta, said in a tweet.

We #WDFBalochistan Strongly condemn the arrest of protesting students by the police against online classes. We demand @jam_kamal for the immediate release of all leaders of Students Action committee and Connect the Disconnect including #MuzamilKhan Immediately.

Taking to Twitter, Bilawal wrote, “To protest peacefully is a constitutionally protected right. Strongly condemn arrest of students in Quetta! Shutting out voices and high handedness has become a new normal under this regime. #PPP demands #releaseallstudents”.

To protest peacefully is a constitutionally protected right. Strongly condemn arrest of students in Quetta! Shutting out voices and high handedness has become a new normal under this regime. #PPP demands #releaseallstudents

Pakistan’s authorities must immediately release all students detained in Quetta who were demanding internet access to continue their studies. Their rights to freedom of expression and peaceful assembly must be respected and protected.