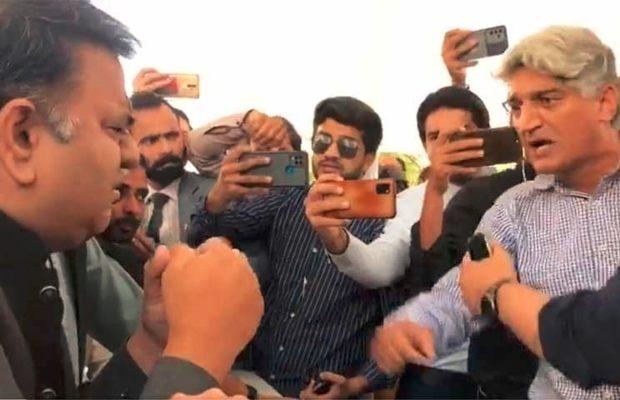 Fawad Chaudhry was irritated by the journalist’s question outside SC!

During all the political mayhem, it’s not just the politicians but also the journalists who have lost cool and patience.

Wednesday saw former federal minister for Information and Broadcasting Fawad Chaudhry having a heated argument with journalists during a press conference outside the Supreme Court.

It all started when PTI leader and former planning and development minister Asad Umar was addressing a press conference accompanied by Fawad Chaudhry.

Fawad accused the journalist in the question (Matiullah Jan)of taking money from certain elements and called him “kiraye ka aadmi [a man on rent]”.

The spat also enraged the other journalists present at the presser of the PTI leaders.

They shouted slogans against Fawad Chaudhry and called him ‘lota, lota’.

Continuous derogatory remarks and refusal to offer an apology by the former minister also led journalists to boycott the media talk by the PTI leaders until an apology from Fawad Chaudhry.

The clip of the incident is now doing rounds on social media with all sorts of reactions.