NADRA has canceled the citizenship of JUI-F leader. 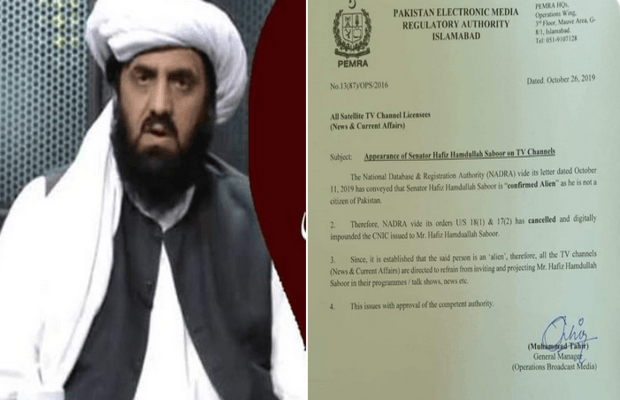 Jamiat Ulema-e-Islam – Fazl (JUI-F) senator Maulana Hafiz Hamdullah has been stripped of form his Pakistani citizenship as the National Database and Registration Authority (NADRA) on Saturday has declared him a confirmed alien.

This revoke of his Pakistani citizenship has stirred some reactions on social media, by late-night hashtag #HafizHamdullah kept trending on the social media.

People have raised their concerns over how can this happen to a person who has been selected as the senator and having a son serving in the Pak Army.

#HafizHamdullah cannot suddenly be termed an "alien",his CNIC destroyed & be banned from national media.V oppose this questionable action demand explanation. He has been an MPA & later senator since 2012.Born in QilaAbdullah, he was also minister health & now Chmn senate Cttee. https://t.co/FRhSCz6uVS

PEMRA ban on TV appearances of Mr. Hamdullah is sheer violation of his inalienable freedom of opinion & expression. He's a misogynist who takes pride in threatening women for rape. But that's not why you're hounding him. You're against him coz he's Afghan national? Shame on you.

Why was everyone sleeping till now? PTI spoke several times about the issuance of NICs through illegal means, then for the last one year why did they not take any notice of their own claims? Timing of surfacing such info questions the intentions. #hafizhamdullah pic.twitter.com/9G2XMfGagG

I don't know who is Hafiz Hamdullah? But I know that what we are doing,that is our shameful face, nobody is allowed 2 raise his voice for the rights,that is fact,
Here is the proof,when #HafizHamdullah was appointed as JV teacher n 1986, do something vd this paper also PTI govt, pic.twitter.com/SommUAhkp0

Chinese can get nationality easily. But pakistani by born are called as aliens.
This is bullshit#HafizHamdullah pic.twitter.com/GnZdSaPoH6

A point to be noted from @MuftiKifayatJUI.
Thanking NADRA, he said that this made our work easy to make the people understand that we are fighting for the freedom of the institutions. #WeStandWithHafizHamdullah #HafizHamdullah

#HafizHamdullah is from my native town #Chaman. He remained Health minister for tenure of five years and then senator for six years. His son is serving in #Pak Army as Second Lieutenant, so to clear alien him now? @a_siab @juipakofficial @MuftiKifayatJUI @OfficialDGISPR pic.twitter.com/LvWhkoFWiv

The electronic media watchdog in the notification has regulated the broadcasters not to invite the JUI-F leader to talk-shows as he is not a Pakistani citizen from now on.

Maulana Hamdullah had been elected as an MPA from Balochistan in the 2002 General Elections on a Muttahida Majlis-e-Amal ticket and served as Provisional Health Minister from 2002 till 2005.