"Wasn't Worried", says the student in burqa who was surrounded by Saffron Scarf Group 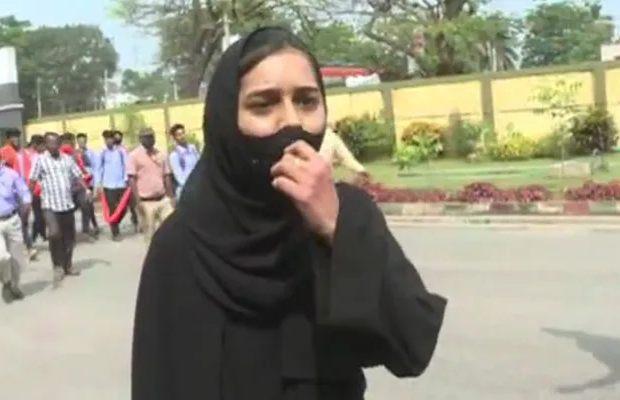 The hijab versus saffron scarf row in Karnataka colleges has taken a serious turn.

A video clip has gone viral on social media showing how saffron scarf goons were harassing a Muslim student at the college campus.

The hijab-clad girl is being regarded as a hero for not getting scared in front of the violent mob as she chanted ‘Allah Akbar’ in response to the Hindu extremists shouting  Jai Shri Ram.

The female student has been identified as Muskan.

The girl told India Today TV that she shouted Allah hu Akbar in response to chants of Jai Shri Ram by those heckling her.

“I was going to college to submit an assignment. There were some people who were not allowing me to go to the college because I was wearing a burqa. They were asking me to remove the burqa and then go inside,” Muskan said.

“They started shouting Jai Shri Ram. So I started screaming Allah hu Akbar. The principal and lecturers supported me and protected me.”

She said while she knew about 10 percent of the men in the group as students at the college, the rest seemed to be outsiders.

Colleges across Karnataka have seen rising protests by hijab-wearing students.

It all started reportedly two weeks ago when stories surfaced that Government Girls PU college in Udupi barred six Muslim girls from classes for insisting on keeping on the hijab.

Following the row, the government has shut down all schools and colleges for three days.