The strong winds on Friday have caused roofs and walls to collapse in various areas of the Metropolis. 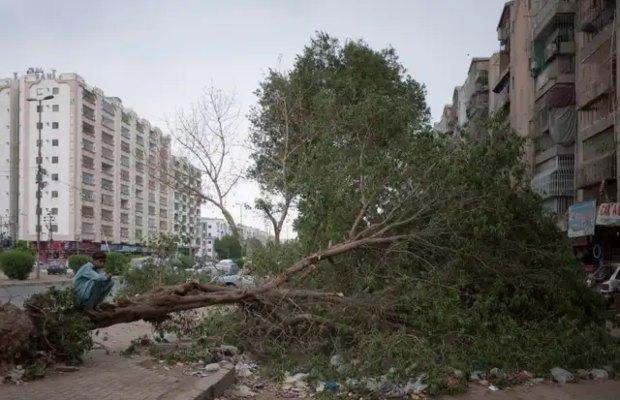 Strong and gusty winds engulf Karachi while the city’s temperature is likely to drop to a single-digit from January 22 to 26.

Pakistan Meteorological Department has forecast a cold and dry spell with some gusty winds in Karachi.

According to the Met Office, westerly and northwesterly winds may enter the city, precipitating a cold-weather week from Saturday.

The cold spell may continue through to the end of January.

While the night temperatures are likely to fall between 8 to 10 degrees Celsius.

Strong winds from the west direction have started blowing with an average speed of 25-30kts gusting 35kts  due to a steep pressure gradient and may persist till night.

The strong winds on Friday have caused several roofs and walls to collapse in various areas of the Metropolis.

tweet
Share on FacebookShare on TwitterShare on PinterestShare on Reddit
Saman SiddiquiJanuary 21, 2022
the authorSaman Siddiqui
Saman Siddiqui, A freelance journalist with a Master’s Degree in Mass Communication and MS in Peace and Conflict Studies. Associated with the media industry since 2006. Experience in various capacities including Program Host, Researcher, News Producer, Documentary Making, Voice Over, Content Writing Copy Editing, and Blogging, and currently associated with OyeYeah since 2018, working as an Editor.
All posts bySaman Siddiqui