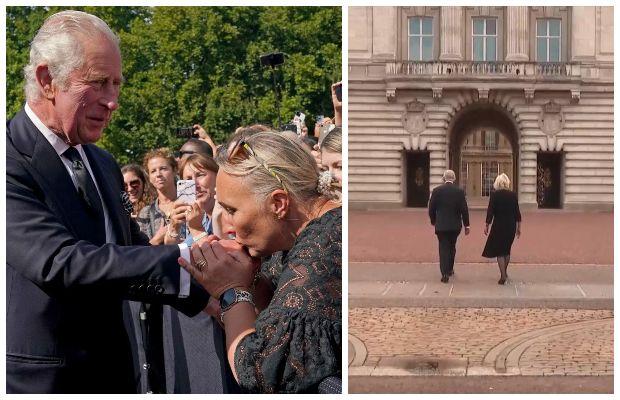 King Charles ascended the throne on Thursday following the death of his mother, Queen Elizabeth, at age 96.

The king, 73, and his wife Camilla, the Queen Consort, entered the doors of the sprawling residence after greeting the huge crowds of mourners.

King Charles III was driven to the Palace in a motorcade with the Queen Consort, Camilla by his side.

A huge cheer rang out as the new king arrived at Buckingham Palace.

“God Save The King” the crowd was heard shouting.

A huge cheer rings out as King Charles and Queen Camilla arrive at Buckingham Palace.

“God Save The King” the crowd shout. pic.twitter.com/nRNcCgsBby

Before entering the palace, the King met his public who came out to express their sympathy for the monarch on the passing of his mother.

King Charles III was greeted by thousands of mourners and well-wishers.

The King meets his public as people express their sympathy to the monarch. pic.twitter.com/P0OSm6iAxW

On his first full day of duties, Britain’s new king is expected to address the nation later in the day at 6 PM local time.

As the King entered the palace, the Royal Standard has been raised above Buckingham Palace for the first time during the King’s reign.

While all the official flags across the UK must be flown at half-mast following the death of Queen Elizabeth II until the day following her funeral, according to the UK government guidance.

Only the Royal Standard, flown when the sovereign is in residence at a royal palace, will remain in its usual position, the government stated.

Following his arrival, the King held his first in-person audience with the British prime minister Liz Truss at Buckingham palace.

The Prime Minister has arrived at Buckingham Palace for an audience with The King. pic.twitter.com/YRLvZ4GHyV

The Prime Minister has arrived at Buckingham Palace for an audience with The King. pic.twitter.com/YRLvZ4GHyV

tweet
Share on FacebookShare on TwitterShare on PinterestShare on Reddit
Saman SiddiquiSeptember 9, 2022
the authorSaman Siddiqui
Saman Siddiqui, A freelance journalist with a Master’s Degree in Mass Communication and MS in Peace and Conflict Studies. Associated with the media industry since 2006. Experience in various capacities including Program Host, Researcher, News Producer, Documentary Making, Voice Over, Content Writing Copy Editing, and Blogging, and currently associated with OyeYeah since 2018, working as an Editor.
All posts bySaman Siddiqui