On Wednesday, the School Education Department Punjab notified of three holidays in a week in schools due to smog.

According to the notification, all private and public schools in Lahore District would remain closed on every Friday and Saturday, in addition to the weekly holiday on Sunday till further orders.

The School Education Department has issued a notification for closure of schools on the order of Lahore High Court.

The Punjab government also submitted the holidays notification in the court. 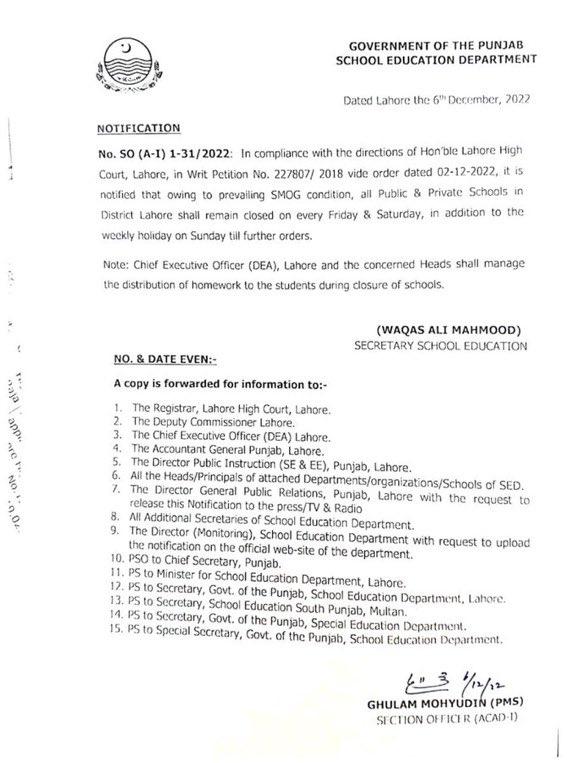 Meanwhile, in the light of Lahore High Court’s order, Directorate General Provincial Disaster Management Authority Punjab has issued a notification to keep the private institutions and their sub-offices of Lahore closed for 3 days in a week.

In the notification issued by PDMA, it is said that the breathing of the citizens is being affected due to smog in Lahore, so all the private institutions working within the limits of Lahore and their sub-offices on Friday and Saturday. will also be closed.

According to Relief Commissioner Punjab Zahid Akhtar Zaman, the decision to close the offices of private companies has been made under subsection 2H of section 4 of the Punjab National Climate (Prevention and Relief) Act, 1958, the notification issued in this regard from December 7.

It will remain in force till January 15.

It should be noted that yesterday the Lahore High Court had instructed the provincial government to issue a notification to keep schools closed for at least 3 days a week in Lahore.

Justice Shahid Karim had directed the provincial law officer to submit the notification of closure of schools to the court on Wednesday (today).

In compliance with the court orders, the School Education Department of Punjab issued a notification last night, a copy of which has also been submitted to the bench of the Lahore High Court today.

Punjab Chief Minister Chaudhry Pervez Elahi had termed smog as a ‘disaster’ and ordered effective implementation of the plan to reduce smog in the province and directed action to control the factors that caused it.

A day earlier, the high court conducted hearing on a case related to smog situation in Lahore, which has repeatedly topped the daily ranking of most polluted city in the world.

The court had also directed the government to amend its policy regarding brick kilns and factories responsible for increasing air pollution.

Such factories and brick kilns should be razed, instead of sealing them for violating the environment laws, Justice Karim stressed.

Residents choking in acrid smog in the walled city pleaded with officials to take action.

Air pollution has worsened in Pakistan in recent years, as a mixture of low-grade diesel fumes, smoke from seasonal crop burn off, and colder winter temperatures coalesce into stagnant clouds of smog.