The women in Afghanistan have been ordered to wear an all-covering burqa in the latest decree by the Taliban. 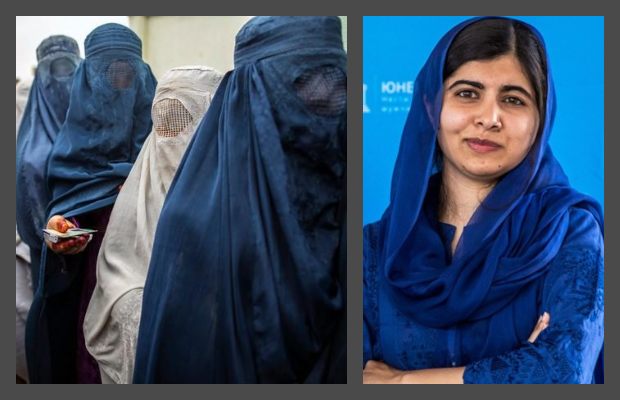 Malala Yousafzai has condemned the Taliban’s burqa imposition in Afghanistan.

The women in Afghanistan have been ordered to wear an all-covering burqa in the latest decree by the Taliban.

Nobel laureate and the education activist shared a hard-hitting statement on her social media platforms in response to the Taliban’s orders of burqa imposition in Afghanistan.

“The Taliban want to erase girls and women from all public life in Afghanistan,” she said.

She went on to add that the Taliban want “to keep girls out of school and women out of work, deny them the ability to travel without a male family member, and force them to cover their faces and bodies completely.”

“We must not lose our sense of alarm for Afghan women as the Taliban continue to break their promises. Even now, women are taking to the streets to fight for their human rights and dignity – all of us, and especially those from Muslim countries, must stand with them,” she said in a statement posted on her Twitter handle.

Malala Yousifzai called for leaders around the world to hold the Taliban accountable for violating the human rights of millions of women and girls.

Taliban’s recently reinstated Ministry for Propagation of Virtue and Prevention of Vice, on May 7, announced that it is “required for all respectable Afghan women to wear a hijab.”

The statement also added that the chandori – a blue-colored Afghan burqa, which covers a woman from head to toe – is the “best hijab”.