According to Military TV, a state of emergency had been declared for one year 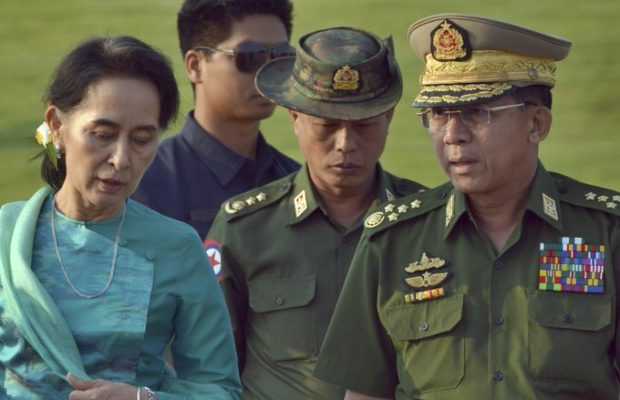 Myanmar’s military takes control of the country after detaining de-facto leader Aung San Suu Kyi and other politicians in the early hours of Monday.

A state of emergency has been declared for one year by the military following days of escalating tension over the result of November’s parliamentary elections.

As being reported, Aung San Suu Ky, the country’s de facto leader, President Win Myint, and other senior members of the National League for Democracy party have been detained in the capital, Naypyidaw.

According to a video broadcast on military-owned television, power was handed to Senior General Min Aung Hlaing, commander-in-chief of the armed forces, citing “huge irregularities” in November’s vote.

An announcement read on military-owned Myawaddy TV cited a section of the military-drafted constitution that allows the military to take control in times of national emergency.

The broadcast said that the reason for the takeover was in part due to the government’s failure to act on the military’s claims of voter fraud in last November’s election and its failure to postpone the election because of the coronavirus crisis.

tweet
Share on FacebookShare on TwitterShare on PinterestShare on Reddit
Saman SiddiquiFebruary 1, 2021
the authorSaman Siddiqui
Saman Siddiqui, A freelance journalist with a Master’s Degree in Mass Communication and MS in Peace and Conflict Studies. Associated with the media industry since 2006. Experience in various capacities including Program Host, Researcher, News Producer, Documentary Making, Voice Over, Content Writing Copy Editing, and Blogging, and currently associated with OyeYeah since 2018, working as an Editor.
All posts bySaman Siddiqui