despite the India’s strong protests against Nepal’s territorial claims, President Bhandari has approved the second amendment bill, 2077 of the country’s constitution 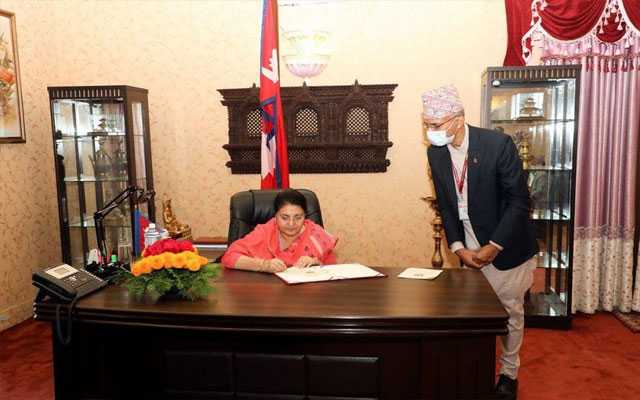 The President of Nepal, Bidya Devi Bhandari has signed the Constitution amendment bill on Thursday to update the country’s new political map which has merged three Indian territories, hours after the Parliament approved it.

Reports on international media said that despite the India’s strong protests against Nepal’s territorial claims, President Bhandari has approved the second amendment bill, 2077 of the country’s constitution.

Bhandari “authenticated the bill stepping on the Article 274 (10) of the Constitution. With this approval of the president, the process of implementation of the new map has officially completed,” reports said.

The country’s Coat of Arms will now include the new map merging the territories of Limpiyadhura, Lipulekh and Kalapani, as the president has signed the bill passed by the parliament of Nepal.

Meanwhile, India has already termed the Nepal map claims as an “artificial enlargement”.

Last month, Nepal released the revised political and administrative map of the country claiming over the strategically important areas, more than six months after India published a new map in November 2019.

Earlier on Thursday, the upper house of the Nepalese parliament, or the National Assembly, has unanimously passed the Constitution amendment bill providing for the inclusion of the country’s new political map in its national emblem.