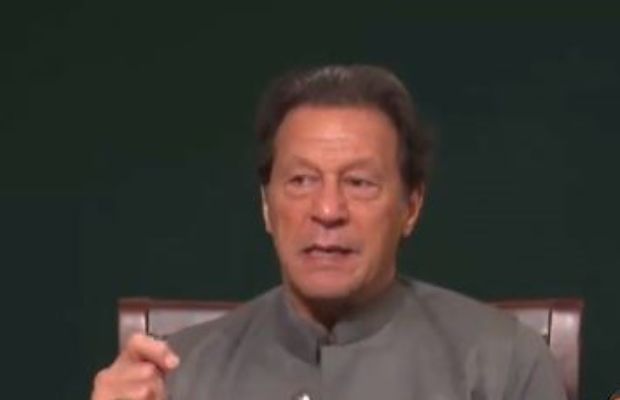 Pakistan to break into three parts if the establishment does not take the ‘right decision’; Imran Khan’s new statement shared in an interview to a private channel on Wednesday has left politicians and netizens fuming.

The ousted prime minister said that the country is on the brink of “suicide” if “right decisions” are not taken, as it might move towards default.

Former PM Imran Khan said, “The actual problem here is of Pakistan and establishment. If the establishment does not take the right decision, then I will give it to you in writing that they will be destroyed, and the armed forces will be the first ones to be destroyed.”

PTI  Chairman warned that once Pakistan is destroyed, it will default, and the international world will ask Pakistan to move towards denuclearisation — as Ukraine did in the 1990s.

“Indian think tanks abroad are mulling to separate Balochistan, they have plans, this is why I am putting pressure,” the ousted premier said.

His interview did not sit well with the politicians.

PPP Co-Chairman Asif Ali Zardari said Imran Khan’s statement sounded like he is not a Pakistani.

He said that the statement was enough to show that he was unfit for holding any public office.

Shehbaz Sharif took to Twitter while being in Turkey and asked Imran Khan to better concentrate on his politics rather than talking about the ‘division’ of the country.

“Don’t cross your limits,” he warned the PTI chairman Imran Khan in his tweet.

While I am in Turkey inking agreements, Imran Niazi is making naked threats against the country. If at all any proof was needed that Niazi is unfit for public office, his latest interview suffices. Do your politics but don't dare to cross limits & talk about division of Pakistan.

Here is how reactions to the Imran Khan’s Split Pakistan statement pour in on the Twitter timeline.

Imran khan’s interview:”Pak Army will be destroyed-Had this Govt not been removed “ Pakistan for sure will be divided into 3 parts”if today establishment leave neutrality and let imran to rule only then Pakistan be saved ? Highly selfish and condemnable approach to come to power!

Lots of Pakistanis asking this question: why Laadla law and Laadla treatment for Imran Khan and why different laws for everyone else, are they children of the lesser gods? This is aik nahee, dau Pakistan. https://t.co/gbBT5dDMUd

Former Prime Minister Imran Khan on a dangerous path. He once said he could be more dangerous if voted out and it looks like he is now. His recent interview with BOL could put him in lot of trouble.