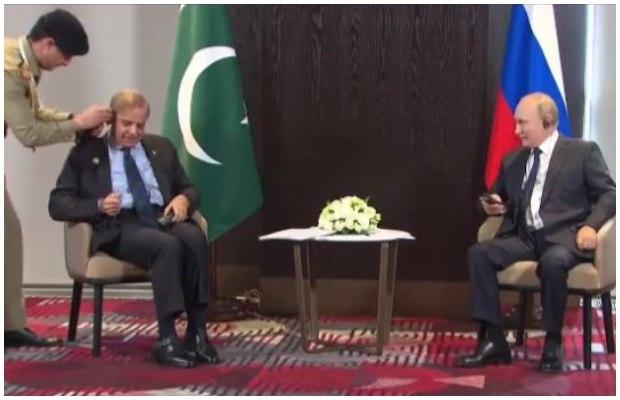 It was the other day when Pakistan prime minister Shehbaz Sharif faced an awkward moment during his meeting with Russian President Vladimir Putin as his mic and earpiece kept falling off his ear.

The video of the awkward moment is being widely shared on social media and many of his political opponents mocked the Pakistani PM on the Twitter timeline.

While President Putin remained seated during the entire episode looking at his Pakistani counterpart and smiling as PM Shehbaz called out for help.

Shehbaz Sharif said, “Can someone help me?” and an official immediately rushed in to fix the earpiece but it fell out of year once more leaving  Russian President Putin to laugh at the incident.

Fallon is seen commenting on the video in a viral clip that was telecast on the show on Sep 16, “That guy is the leader of 220 Million people.”

After 4 long years, Pakistan finally gets a leader who commands global respect.🇵🇰💚pic.twitter.com/vVxWeh1OsO

“That guy is leader of 220 Million people”

These conspirators are a Global embarrassment for Pakistan!!pic.twitter.com/zJ2Rc8ANVp

Shahbaz Sharif being laughed upon by Jimmy Fallon for his goof ups, his show has a huge global audience. Finally a leader who commands global respect.🙌@CMShehbaz @MaryamNSharif pic.twitter.com/98K6sVuLzr

While there are few social media users who were visibly angered as the clip started to trend on social media.

Hey @jimmyfallon – have u talked abt the devastating floods destroying Pakistan? "A nation of 220 million people" is destroyed by climate change because of YOUR country's greed & wastefulness. If u haven't donated or raised funds for us u don't get to use us as a joke.

Well, there’s no harm in fixing a technical malfunction. This can happen to anyone and anywhere. The point here is what could have been the reaction from the public if it was some other political leader instead Shehbaz Sharif?

There's no Harm fixing a technical malfunction. Can happen to anyone and anywhere. 👍🏻

tweet
Share on FacebookShare on TwitterShare on PinterestShare on Reddit
Saman SiddiquiSeptember 17, 2022
the authorSaman Siddiqui
Saman Siddiqui, A freelance journalist with a Master’s Degree in Mass Communication and MS in Peace and Conflict Studies. Associated with the media industry since 2006. Experience in various capacities including Program Host, Researcher, News Producer, Documentary Making, Voice Over, Content Writing Copy Editing, and Blogging, and currently associated with OyeYeah since 2018, working as an Editor.
All posts bySaman Siddiqui