The bride has shared few official photos of the Mehendi ceremony. 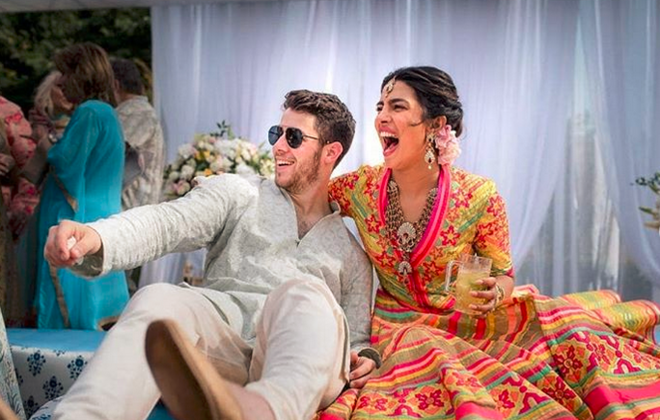 And it’s official, Priyanka Chopra and Nick Jonas have tied the knot. The wedding ceremony was a private affair with selected celebrities and guests invited to it. The latest news out is that the fireworks light up Umaid Bhawan Palace, in Jodhpur where the wedding ceremony took place.

The only images available at the moment are the aerial views of the fort, which light up with the fireworks. As the guests are restricted form using the camera phone at the venue till now there are no leaked images of the event.

As being reported the celebrity couple got married as per Christian rituals at Jodhpur on 1st December and will be getting married as per the Hindu traditions on 2nd December.

Here’s a video of the celebration at Umaid Bhavan Palace in Jodhpur where @priyankachopra and @nickjonas took their wedding vows today. pic.twitter.com/ZFuceWR96h

Many fan pages are claiming that PeeCee and Nick will be sharing the pictures on their social media handles tomorrow.

The Mehendi and Sangeet were held on Friday. Priyanka has shared some of the images from the ceremony on her social media.

She captioned her photos saying, “One of the most special things that our relationship has given us is a merging of families who love and respect each other’s faiths and cultures. And so planning our wedding with an amalgamation of both was so amazing. An important part for the girl in an Indian wedding is Mehendi”

“Once again we made it our own and it was ab afternoon that kicked off the celebrations in the way we both dreamed”, she further added.

We can’t keep our eyes of the happy couple! @priyankachopra and @nickjonas at their mehendi ceremony in Jodhpur. pic.twitter.com/MOCzb8P3j9

tweet
Share on FacebookShare on TwitterShare on PinterestShare on Reddit
Saman SiddiquiDecember 2, 2018
the authorSaman Siddiqui
Saman Siddiqui, A freelance journalist with a Master’s Degree in Mass Communication and MS in Peace and Conflict Studies. Associated with the media industry since 2006. Experience in various capacities including Program Host, Researcher, News Producer, Documentary Making, Voice Over, Content Writing Copy Editing, and Blogging, and currently associated with OyeYeah since 2018, working as an Editor.
All posts bySaman Siddiqui