While talking to the media accompanied by Faisal Vwda, Fawad Chaudhry said that the confidence in the chief election commissioner had become zero. 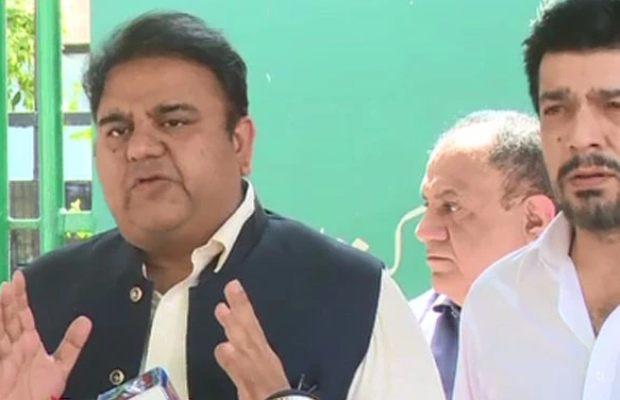 The Election Commission of Pakistan (ECP) on Wednesday dismissed a reference filed by Pakistan Tehreek-e-Insaf (PTI) seeking the disqualification of its dissident members of the National Assembly.

A three-member bench headed by Chief Election Commissioner (CEC) Sikandar Sultan Raja reserved had decision earlier after hearing arguments from all sides including the PTI and the lawyers of the dissident MNAs.

The election commission, in the verdict, unanimously said that the declaration filed against the MNAs under Article 63(A) was not found in accordance with the Constitution of Pakistan.

While talking to the media accompanied by Faisal Vwda, Fawad Chaudhry said that the confidence in the chief election commissioner had become zero.

“The CEC should get a designation in the PML-N. The reason behind the constitutional crisis is that the Election Commission of Pakistan is dysfunctional. It is the duty of the institution to maintain the in the society,” he said.

He said that an elected government has been toppled through a US conspiracy.

“The appointment of the army chief should not be made a political matter. It is just an administrative matter,” Fawad Chaudhry said adding that the economy had been destroyed.

PTI leader Faisal Vawda talking to the media termed the ECP a wing of the PML-N.

“Injustice was done with me. The real story of black sheep will start from today,” he added.

PTI had filed a reference against 20 dissident MNAs under Article 63(A).

tweet
Share on FacebookShare on TwitterShare on PinterestShare on Reddit
Saman SiddiquiMay 11, 2022
the authorSaman Siddiqui
Saman Siddiqui, A freelance journalist with a Master’s Degree in Mass Communication and MS in Peace and Conflict Studies. Associated with the media industry since 2006. Experience in various capacities including Program Host, Researcher, News Producer, Documentary Making, Voice Over, Content Writing Copy Editing, and Blogging, and currently associated with OyeYeah since 2018, working as an Editor.
All posts bySaman Siddiqui