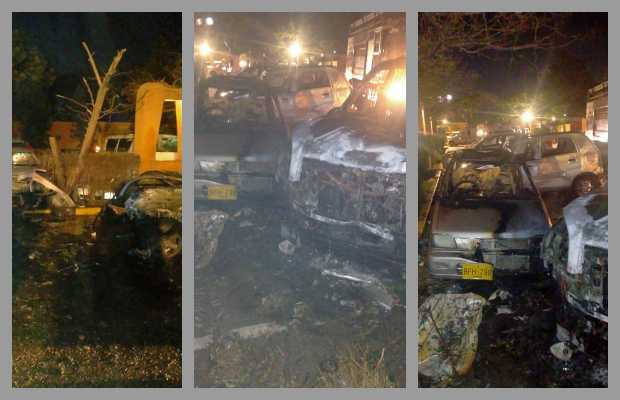 Federal Interior Minister Sheikh Rashid Ahmed has confirmed that the Chinese Ambassador to Pakistan Nong Rong was staying at the Serena Hotel, but he was not present at the premises at the time of the blast.

An explosion occurred in the parking lot of Serena Hotel located on the Shahrah-e-Zarghun Road around 10:30 pm on Wednesday night.

The blast damaged five to six vehicles, killing four and injuring 12 other people as you can see.

A statement issued by Sheikh Rashid said that the Quetta blast was a conspiracy of the enemy. The wave of terrorism in the country is coming under planning, this is the international agenda.

Informing about the dangers, the Home Minister said that there were reports of terrorism in major cities. Terrorism could occur in Rawalpindi, Islamabad, Peshawar, and Karachi.

He also added that security alerts have been issued by the agencies.

He vowed to defeat the enemy and bring them to an end. Conspiracies to harm Pakistan will fail. The Quetta blast will be investigated.

On the other hand, Balochistan Chief Minister Jam Kamal Khan has demanded a report on the Quetta blast. He expressed deep sorrow and regret over the loss of precious human lives in the blast.

He offered his condolences to the families of the victims and said that no one would be allowed to disturb the law and order situation. The entire nation is united to eradicate the scourge of terrorism.

The Balochistan Chief Minister directed the forces to take foolproof security measures and said that the terrorists targeted a local hotel for their cowardly acts.

He said that terrorism has been overcome to a large extent with the good measures taken by the government. He also directed to provide the best medical facilities to the injured.

Meanwhile, DIG Azhar Akram also confirmed that the Chinese ambassador was not present inside the hotel. The injured have been shifted to Civil Hospital, he said.

Deputy Commissioner Quetta in a tweet shared, “It is reportedly a VBIED+SB blast in which 12 people got injured and 04 have succumbed to their wounds. 02 Assistant Commissioners are also among the injured. The wounded are being given the best treatment by the health department.”

It is reportedly a VBIED+SB blast in which 12 people got injured and 04 have succumbed to their wounds.
02 Assistant Commissioners are also among the injured.
The wounded are being given the best treatment by health department. #QuettaBlast