The artist, Aziz Asmar, painted the mural on the last standing wall of a building damaged by air strikes in Idlib. 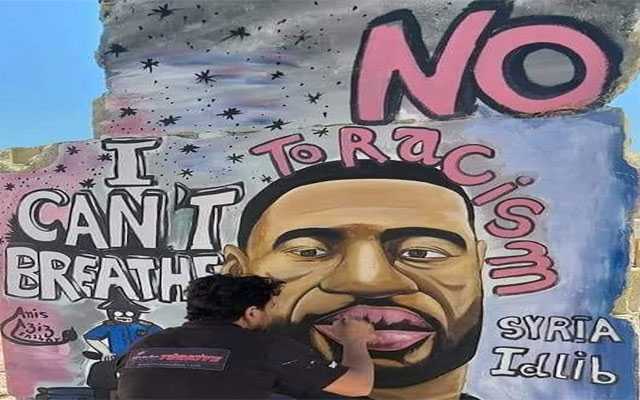 A Syrian artist has painted a striking mural of George Floyd— the black man who was killed in police custody in the US on May 25.

The artist, Aziz Asmar, painted the mural on the last standing wall of a building damaged by air strikes in Idlib.

Asmar said on Monday he was compelled to paint the mural to send “a message of solidarity to all humanitarian causes in the world”. He painted George Floyd’s face next to the sentence “I can’t breathe”, which he repeated multiple times before dying.

The artist worked on the painting with his colleague Anis Hamdoun, said that the images of Floyd reminded him of images he had seen of Syrian children killed by a suspected chemical attack in Damascus and the city of Khan Sheykhoun in 2017.

George Floyd’s death sparked massive protest across the US since last week. Floyd was killed in Minneapolis police custody after pinning his head on the ground last Monday.

A video footage circulating on social media showed a white police officer kneeling on the neck of Floyd, 46, for nearly nine minutes before he died.

The police officer involved in the incident, has been charged with third-degree murder.

Saw the other video and Thought there was only one cop holding down George Floyd.. the man screamed i cant breathe and 3 grown minneapolis Police men choked him to death while another watched ! i'm done 2020 is a bad horror movie #JusticeForGeorgeFloyd #BlackLivesMatters pic.twitter.com/oFvWMGA0vR

Dozens of cities across the US remain under curfews at a level not seen since the violence following the 1968 assassination of civil rights activist Martin Luther King Jr.