He will assess the damage from record floods that have killed over 1,300 people and left over half a million others homeless and displaced. 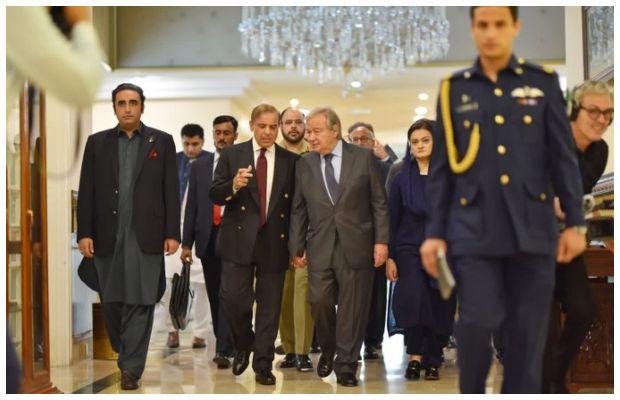 The UN Chief Antonio Guterres arrived in Pakistan on Friday on a 2-day visit.

The UN Chief reached Islamabad to express solidarity with flood affectees battered by the devastating monsoon rains across the country.

Minister of State for Foreign Affairs Hina Rabbani Khar received the UN Secretary-General at the airport.

Upon his arrival, UN Secretary General @antonioguterres was received by MOS @HinaRKhar in #Islamabad.

UNSG is on a #SolidarityVisit to #Pakistan from 9-10 September 2022 to express support in wake of devastating #FloodsInPakistan.

Addressing a joint press conference with Prime Minister Shehbaz Sharif later in the day, he said that the flood is a natural calamity.

UN Secretary-General Antonio Guterres said that Pakistan is being affected by the climatic changes and the world should fully support it.

“We will extend all possible cooperation to the Pakistan government and people,” he maintained.

The UN Secretary-General added that Pakistan has little contribution to global emissions but it is one of the most vulnerable hotspots to climate change.

He said the developed countries should drastically reduce emissions and support countries that need to invest in resilience and recovery as is the case in Pakistan.

At the National Flood Response & Coordination Centre, UNSG accompanied by Prime Minister Muhammad Shehbaz Sharif was briefed on the scale of the floods and an overview of the response.

UN Secretary-General met also with the United Nations Country Team. He discussed the flood response and stressed that we need to do everything we can for the people of Pakistan.

UN Secretary-General met with the United Nations Country Team. He discussed the flood response and stressed that we need to do everything we can for the people of Pakistan. #SolidarityVisit #UNSGinPak #PakistanFloods #ClimateCrisis pic.twitter.com/hoNuHg32eo