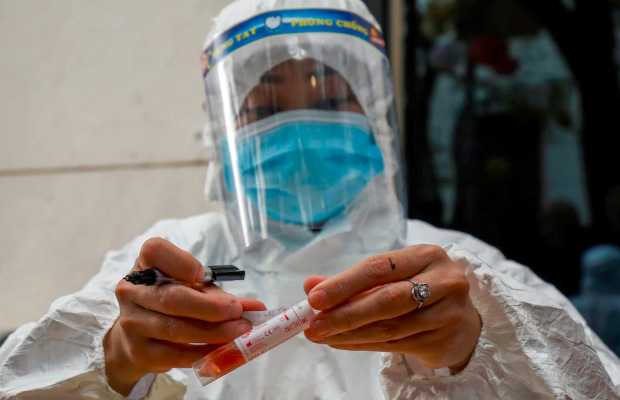 Vietnam has discovered a new hybrid coronavirus variant that is a combination of the Indian and UK COVID-19 variants and spreads quickly by air, the country’s health minister said on Saturday.

Vietnam’s Central Institute of Hygiene and Epidemiology in a statement said that its scientists had detected gene mutations in four out of 32 patient samples through gene sequencing.

There were seven known coronavirus variants in Vietnam before Long’s announcement, according to the Ministry of Health.

“We have discovered a new hybrid variant from the Indian and the UK strains,” Health Minister Nguyen Thanh Long told a national meeting on the pandemic Saturday, according to state media.

“The characteristic of this strain is that it spreads quickly in the air. The concentration of virus in the throat fluid increases rapidly and spreads very strongly to the surrounding environment.”

“More specifically, it is an Indian variant with mutations that originally belong to the UK variant,” he said.

Long was quoted as saying, “Laboratory cultures of the new variant, which is much more transmissible than the previously known types, revealed that the virus replicated itself very quickly, explaining why so many new cases appeared in different locations in a short period.”

More than 6,800 cases including 47 deaths have been reported in Vietnam.

After successfully containing the virus for most of last year, Vietnam is grappling with a rise in infections since late April that accounts for more than half of the country’s total COVID cases.

The new round of infections has made the public and government fearful as the country of 97 million people — has vaccinated a little over a million citizens.

Meanwhile, the authorities have quickly moved to place strict limits on movement and business activity.

The government has ordered to close Cafes, restaurants, hair salons, and massage parlours as well as tourism and religious spots in various areas of the country.