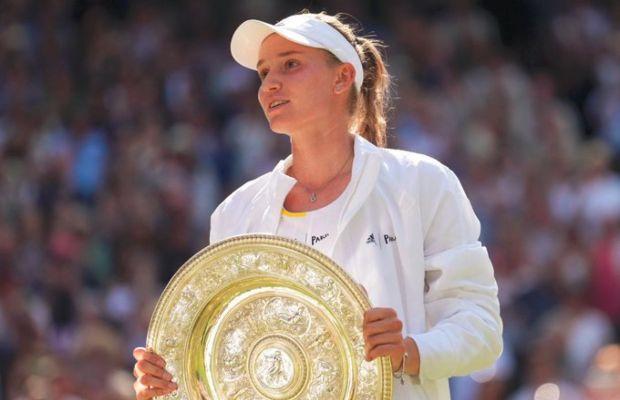 Elena Rybakina of Kazakhstan wins the Ladies Single Title at Wimbledon 2022 on Saturday.

The 23-year-old defeated Ons Jabeur of Tunisia 3-6, 6-2, 6-2 in the Wimbledon final to become the first tennis player from Kazakhstan to win a Grand Slam title.

She also become the youngest Wimbledon Champion since Petra Kvitova in 2011.

Today’s final was the first women’s title match since 1962 at Wimbledon between two players who were making their debuts in a major final.

Rybakina, ranked No. 23 become the second women to win the Wimbledon title having a lower ranking.  Since the WTA computer rankings began in 1975, just one woman ranked lower than Rybakina won Wimbledon — Venus Williams in 2007 at No. 31,

While Ons Jabeur signed off by wishing Eid Mubarak to the Muslim world.
Jabeur becomes the first Arab and African woman to play for the Grand Slam, a new emerging Tennis star!
Moscow-born Rybakina has represented Kazakhstan since 2018 when that country offered her funding to support her tennis career.

This switch has been a topic of conversation during Wimbledon as the All England Club barred all players who represent Russia or Belarus from entering the tournament amid the war in Ukraine.