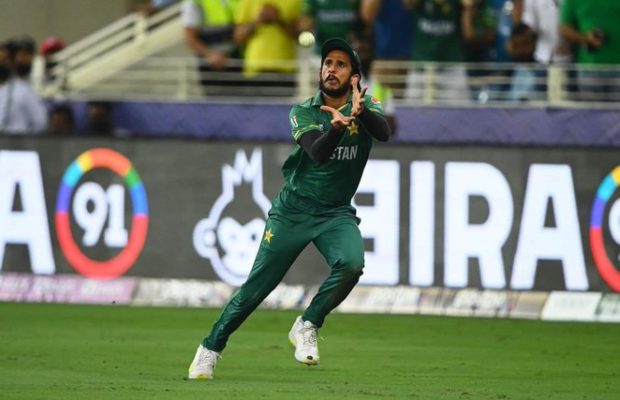 It was indeed a  stupendous fightback from Matthew Wade and Marcus Stoinis as they pulled their team to a stunning five-wicket victory against Pakistan in the second semifinal of the T20 World Cup on Thursday in Dubai.

While millions of Pakistan cricket fans were yet again left heartbroken after watching Hassan Ali at the field at first poor performance with the ball, and later dropping the crucial catch of Wade in Shaheen Afridi’s last over.

The chance earned by Matthew Wade was instantly punished with three straight sixes as the match ended prematurely!

And the dropped catch proved to be the turning point of the knockout match and social media is been in an uproar following the loss in the semi-final.

Hassan Ali gave the most 44 runs in 4 overs and could not get a single wicket.

Dropping a catch at the last minute when a wicket was needed,  proved to be the worst for Pakistan. And that is what netizens are crying over the split milk!

This happens when you do not drop some one when he is in such a bad form. Team management was keeping his bad performance under the rug because of winning games. We did not even tried bench strength against small teams. That's what cost us the trophy. #HassanAli #PAKVSAUS https://t.co/IlMoU9ZU5U

If asking about 3 sixes on 3 balls by Wade; Goddamn it wouldn't be happening that way if Hassan Ali had NOT dropped Wade. He gave Wade another chance, who wouldn't Love to LIVE Another Chance? #PAKvsAUS #T20WorldCup #Pakistan

We were going unbeatable and then Hassan Ali dropped the catch 😭

It's okay, Hassan Ali
We win together. We lose together.#PAKvAUS pic.twitter.com/WOc7nJPfpg

No one knows what Hassan Ali went through when he dropped that catch.
Be like Shoaib Malik.
Hassan Ali #PAKvAUS pic.twitter.com/dLEljQPsqr