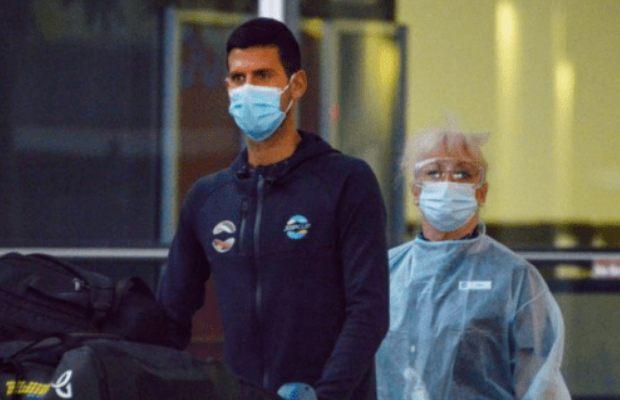 Novak Djokovic’s Australian visa was cancelled on Thursday and the World No 1 tennis player is to remain in immigration detention!

Djokovic flew into Melbourne airport on Wednesday night planning to defend his Australian Open title however upon his arrival, Australia cancelled Djokovic’s visa and denied entry upon his arrival earlier.

The countrys’ border agency officials said the 34-year-old had “failed to provide appropriate evidence” for entry after arriving from Dubai.

He is now being held at a hotel in the Melbourne suburb of Carlton which is used for immigration detention.

As being reported, Djokovic’s team challenged ABF’s decision, and a hearing at the Federal Circuit and Family Court of Australia has been scheduled for Monday.

Australia will not immediately deport Serbian tennis player Djokovic as the star remained in immigration detention, a government lawyer told a court hearing.

Facing a legal challenge from the Serb on Thursday, state lawyer Christopher Tran said Australia did not plan to deport him before a final court hearing scheduled for Monday.

Federal Circuit Court Judge Anthony Kelly said there was a delay in receiving the application for a review of the visa decisions and the temporary ban on Djokovic’s deportation.

Serbian president Aleksandar Vučić said the country had offered support to world No 1.

“I told our Novak that the whole of Serbia is with him and that our bodies are doing everything to see that the harassment of the world’s best tennis player is brought to an end immediately,” he said in a statement.

Serbian media reported Vučić had summoned Australia’s ambassador in Belgrade and demanded that they immediately release Djokovic to compete.

On the other hand, the Australian prime minister, Scott Morrison, rejected the harassment suggestion on Thursday.

“Australia has sovereign borders and clear rules that are non-discriminatory as so many countries do … it has to do with the fair and reasonable application of Australia’s border protection laws … all I can say is that the evidence medical exemption that was provided was found to be insufficient,” PM Morrison said.

tweet
Share on FacebookShare on TwitterShare on PinterestShare on Reddit
Saman SiddiquiJanuary 6, 2022
the authorSaman Siddiqui
Saman Siddiqui, A freelance journalist with a Master’s Degree in Mass Communication and MS in Peace and Conflict Studies. Associated with the media industry since 2006. Experience in various capacities including Program Host, Researcher, News Producer, Documentary Making, Voice Over, Content Writing Copy Editing, and Blogging, and currently associated with OyeYeah since 2018, working as an Editor.
All posts bySaman Siddiqui