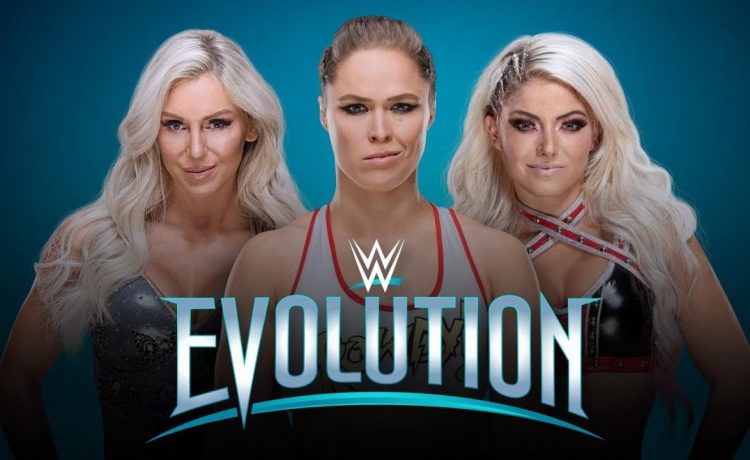 WWE Evolution 2018 event; the card is headlined by Raw Women’s Champion Ronda Rousey vs. Nikki Bella, and no doubt history er… HERSTORY will be made. On a personal note, I’d like to thank Stephanie McMahon for creating the stars, sun, moon, and all things women so that we can have this event.

So, the event started Renee Young, Michael Cole, & Beth Phoenix are on commentary. The First match was in Between Trish Stratus & Lita vs. Alicia Fox & Mickie James w/Alexa Bliss. The match was so good because of the WWE Women Legends were in the ring and the moment Trish confronted Mickie the crowd screamed even louder because of their awesome rivalries back. Lita and Trish defeated Alicia Fox and Mickie James.

2018 Mae Young Classic Finals: Toni Storm vs. Io Shirai: This was a great sprint style match that made the best of the time given to them. The execution was really good, and this was easily the best thing on the show so far, with Storm continuing to look like a star.

The Riott Squad vs. Natalya, Sasha Banks, & Bayley: This was good overall, it had a few hiccups, but the closing stretch was really well done and it felt fun. This was Liv’s best performance overall so far on the main roster. The Riott Squad remains losers, and why this got more time than Toni vs. Io I’ll never know, but at least it was good.

NXT Women’s Title Match: Champion Kairi Sane vs. Shayna Baszler: It’s a shame that so many pigeonhole Baszler as just Rousey’s friend when she’s worked very hard to develop into a great heel and really good well rounded wrestler. It took the help of Jessamyn Duke & Marina Shafir, but Baszler is the champion once again and it’s time to get ready for the trio to run wild in NXT. This was great stuff, about on the level of their Takeover match. I wish the interference would have been hidden a bit better, but it gives fans more of a reason to hate Baszler and she and her pals have been working Sane, Shirai, Yim and others on the house show loop in trios tags, so that should lead to some fun tags on NXT TV. I’d prefer a clean finish, but at the same time, can appreciate what they are setting up. This was great pro wrestling with the pure babyface fighting against all odds to prove herself and the heel flipping the script to finally take her belt back. They work extremely well together, and the good news is that we’ll get more of it.

Smackdown Women’s Title Last Woman Standing Title Match: Champion Becky Lynch vs. Charlotte: This was an overall really great match and effort by both as they went for broke and really gave it their all. I felt that it was at it’s best when they were just scrapping out of hate and that it eventually became a very WWE gimmick heavy/over produced match when it didn’t really need to be, but that didn’t hurt my enjoyment. There were a lot of little things I enjoyed, like Becky’s selling of Charlotte’s comeback and the overall vibe of the match was on point and played off of the feud very well and the crowd loved it. Often times you get these gimmick matches to play off of a feud and the tone just doesn’t fit what it should be, but they nailed it here and Becky retains, which I feel was the right call in my opinion. Overall this was a success, and felt like an appropriate blow off/end to the feud, at least for now, it’s time for Becky to move on. They had some strong competition from the NXT ladies, but delivered big time.

Raw Women’s Title Match: Champion Ronda Rousey vs. Nikki Bella: I am fully aware that there are times where Rousey will have to sell, but it’s becoming a regular thing so much that it feels to me that she’s losing that bad ass vibe because she’s selling for extended times for everyone. I will say that the layout was good, and how Nikki got the heat made sense, and credit to Nikki, she took a lot of punishment and worked really hard, as this was better than I had expected. They played their roles well and had an invested crowd, and Rousey retained. Overall a good match.