HONOR Pakistan outdoes itself with breakthrough releases in 2019

The flagship X series is the first-ever smartphone by HONOR Pakistan to have a Pop-up selfie camera that has helped to increase the overall screen size. 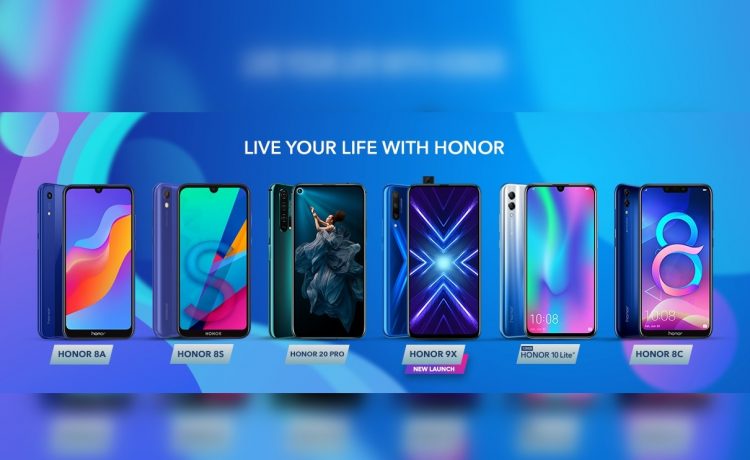 We tested and used all these 6 products to bear witness to the excellent performance of these smartphones. Most importantly the testaments by active users of HONOR smartphones are evidence of its innovative technology and quality.

The year began with a bang, thanks to HONOR 8C that came out in January 2019. The first smartphone to be powered by the Snapdragon 632 octa-core which has enabled it to perform 40% better than its predecessors at an amazing price tag.

Five months later came HONOR 8S was launch in May. This smartphone by HONOR Pakistan offers its users a minimalistic Dewdrop Design with facial recognition and light sensors for the front camera. 8S is not only a communication device but is a piece of art due to the good-looking Dual Texture Body that comes in Gold, Black, and Blue.

In the month of August, HONOR treated us with not one but three different smartphones and personally when three tremendous smartphones come together in close by dates, it makes one pretty indecisive about which one to choose. On August 5th came out HONOR 20 PRO to capture wonders with its four Pocketable Cameras.

The smartphone is extremely stylish in colours of Phantom Blue and Phantom Black with a Side-Mounted Fingerprint Sensor to unlock as you pick it up. HONOR 20 PRO is the flagship smartphone by the tech giant HONOR Pakistan. It comes equipped with specs that have given other smartphones a run for their money. With a large LCD screen of 6.26 inches, the smartphone has a 32MP hole-punch notch on the top left and lastly comes with a triple camera that gives the holder a chance to do outstanding photography.

The second smartphone for the month of August was HONOR 10 LITE PRO 128GB with massive storage capacity and 24MP front camera that allows you to take selfies in the dimmest light yet look ravishing. Next was HONOR 8A which came to a super powerful speaker, which is good enough to have a little party of your own without any support!

The final smartphone of 2019 by HONOR Pakistan was the most anticipated one which has taken the mobile market by fire. It was due to the launch of the most awaited HONOR 9X which is the successor to last year’s 8X. HONOR 9X came out for pre-booking on 20th Dec 2019 exclusively on the e-commerce site Daraz.pk in just Rs. 38,999 along with the free Bluetooth speaker and had managed to rack in a huge volume of pre-sale orders.

The flagship X series is the first-ever smartphone by HONOR Pakistan to have a Pop-up selfie camera that has helped to increase the overall screen size. This has allowed a better viewing experience for those who love to play games or watch movies on smartphones.

It is safe to say that HONOR Pakistan has out done itself with such outstanding releases throughout the year. Hoping for such out-class and regular releases in the Year 2020, while also foretelling that if such a performance continues, there is no stopping HONOR Pakistan from becoming the biggest name in the smartphone industry of Pakistan.