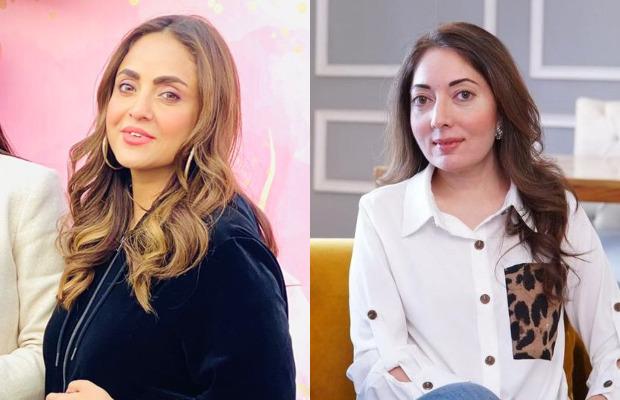 Faruqui had threatened to report Nadia Khan to cybercrime authorities as to the popular morning show host now running a YouTube channel,  had shared a controversial video asking Sharmila Faruqui’s mother about her make-up.

Earlier in the day, Nadia Khan while talking to SAMAA TV, wondered about the reaction since she has removed the video from her Instagram account.

“Things could escalate if I would have said anything further on the issue,” she said.

“Sharmila can go to the cybercrime authorities if she wants to but it’s redundant to drag this issue on after the video has been deleted, she added.

Nadia Khan has faced a severe backlash on social media for her sarcastic questions to Anisa Farooqi.

#NadiaKhan practically making fun of #AnisaFarooqi, mother of #sharmilafarooqi is yet another low these likes greedy celebrities and influencer can go to!Who has given her right to say that, judge her, mock her and practically shame her!Anisa is beautiful,that's her happy place!

Perhaps, Nadia Khan genuinely praised Anisa Faruqi but to social media users, it seemed that she was mocking Anisa Faruqi.

On the other hand, in a series of Instagram stories, Sharmila Faruqi said she wouldn’t stand back and let anyone mock any woman, let alone her own mother. 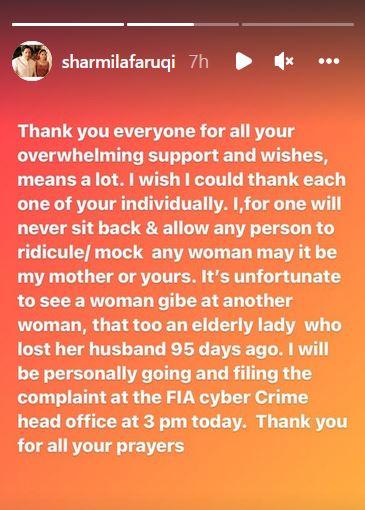 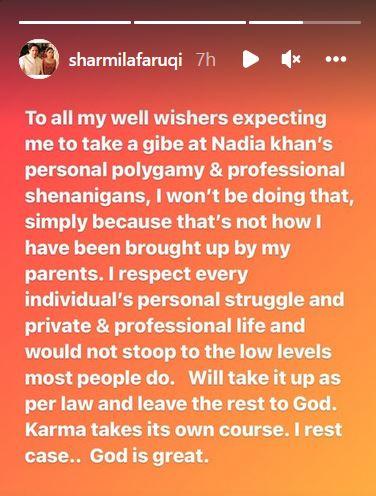 While speaking to The Current, the PPP leader expressed her anger over the incident.

“I inboxed [Nadia] and said it is very shameless of you to do this,” she said.

Sharmila added, “She is shameless and heartless and it’s very very unfortunate. I have a lot of respect for people in showbiz, they work really hard.”

She then emphasised said that her mother is a very “simple woman” adding that she had lost her husband three months ago.

“My mother was at Saboor Aly’s wedding. She [Anisa] is trying to survive without her husband,” she said adding,

“You [Nadia] don’t have anything else to do so you want to get publicity and ratings by making such videos,” said Sharmila.

Sharmila further said, “Even if there was someone else in place of my mother, I would have taken action.”

Speaking about the legal steps she is taking the PPP leader said that she will be approaching cybercrime to get the video removed.

“I’m taking this to the head of cybercrime. I’m going to write them officially today and I’m going to take it to every forum. This is not how things are done.”

“You can not use women or anyone else or even men to ridicule them, just for the sake of your own publicity, and free publicity. I as a woman, as a mother as a daughter, will not tolerate this.”