Back in November 2021, Tuba had changed her sir name from Aamir to Anwar on her social media accounts sparking divorce rumors 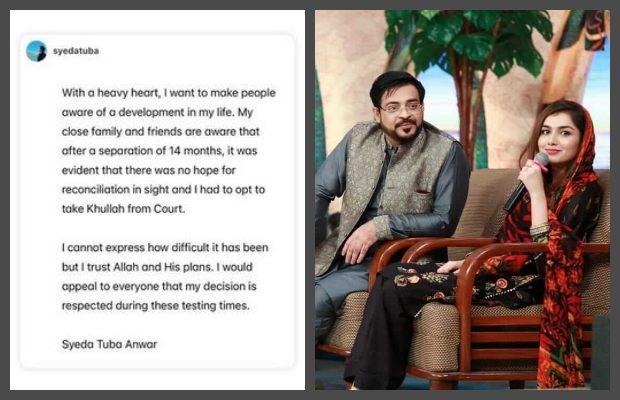 Syeda Tuba is taking Khula from Aamir Liaquat after 14 months of separation!

The second wife of Aamir Liaquat Husain the popular TV personality and PTI MNA from Karachi, Tuba Anwer announced her decision in an Instagram post on Wednesday.

She also confirmed the separation between the two which was reported earlier and refuted at that time.

The statement shared on her Instagram reads, “With a very heavy heart, I want to make people aware of a development in my life. My close family and friends are aware that after a separation of 14 months it was evident that there was no hope for reconciliation in sight and I had opted to take Khula from Court.”

“I cannot express how difficult it has been but I trust Allah and His plans. I would appeal to everyone that my decision is respected during these testing times,” her statement added. 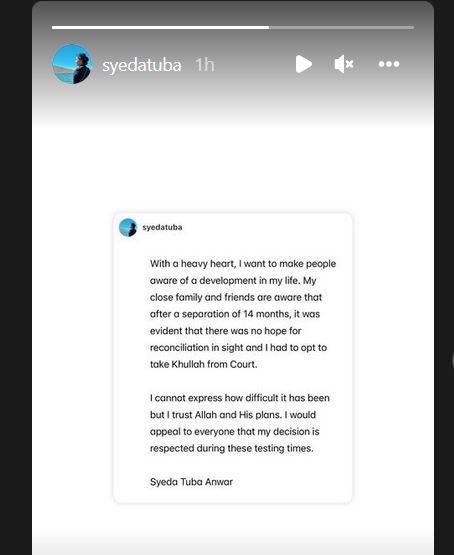 Back in November 2021, Tuba had changed her sir name from Aamir to Anwar on her social media accounts sparking divorce rumors with Dr. Aamir Liaquat.

She had also unfollowed Dr. Aamir Liaquat on Instagram.

Model turned actor Syeda Tuba tied the knot with anchor and politician Aamir Liaquat in 2017, according to the marriage registration certificate that was revealed on social media.

Aamir Liaquat declared his second marriage in the 2018 general elections nomination papers, while a valima ceremony was held in 2018.