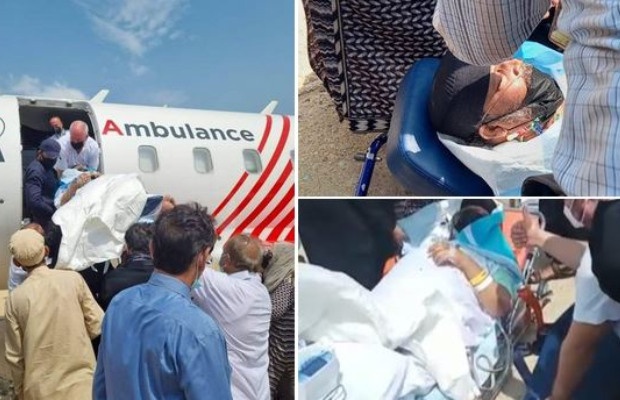 Umer Sharif has been hospitalized in Germany after his health deteriorated during the flight to the US.

Pakistan’s legendary comedian, who is on his way to Washington via an air ambulance, has been admitted to a hospital in Germany.

As being reported, he will spend the night at the hospital for further medical examination and rest.

Dr. Tariq Shahab, who accompanied Umer Sharif on the flight, said that he contracted fever due to restlessness and doctors have examined his medical condition.

“Air Ambulance will spend the night in Germany and then next morning it will leave for the US,” Dr. Shahab said.

Umar Sharif took off from Karachi’s Old Airport on Tuesday noon via German air ambulance for the United States.

Umer Sharif is to be shifted to George Washington University Hospital for medical treatment.

Cardiologist Syed Tariq Shahab, who is actor Reema Khan’s husband and will be treating Omer Sharif in Washington.

Umar Sharif’s fans all across the world are extending prayers and wishes for their beloved artist’s swift recovery.

Dear Comedy Icon Umer Sharif,
We the PCAA as an aviation family along with countless fans of yours are sending all our prayers and thoughts to you. We all want to see you healthy again, spreading smiles all around, as ever. May you feel better soon! pic.twitter.com/TlpWJGmD7H

Alhamdulillah Umer sharif after 7 hours fly arrived germany for the refuel of Air ambulance Our prays are with you #UmerSharif Get well soon and come back because i want to laugh again.