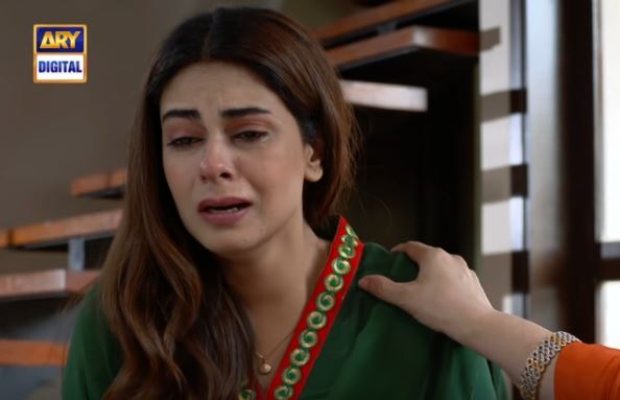 Baddua the drama serial airing at Ary Digital is quite a tedious watch but it has an entertaining value too, the story is fast-paced and the play has become our guilty pleasure. In the previous episode, we have seen that Junaid is giving Abeer a reality check. In this episode, the situation is not different Abeer is suffering hard.

The best thing about Abeer’s character is that she is strong and daring. She is trying her best to make her marriage work but Junaid is not cooperating. He is giving her a hard time. Junaid is cheating on her, he is flirting with another girl. Abeer catches Junaid’s girlfriend’s messages on his phone, she calls her and badly insults her.

One of the best things we liked about this play is Affan’s setting with Neelum. Affan’s mother chooses Neelum as Affan’s bride to be and fortunately, Affan too likes her. They visit Neelum’s house for the proposal and they also say that they are in a hurry. Neelum’s father is a little uncertain after Junaid’s negative experience they are way more careful in taking any decision they asked for some time to make any decision. Neelum’s father is hearing good things about Affan from his circle.

Abeer is badly missing her parents and her character arc showing that she has changed a bit, she has been regretting her past sins. It seems that she is realizing that Junaid’s bad behavior is a kind of punishment she is facing because of her wrongdoings. She starts realizing that she is under a curse she calls her sister. Falak picks her phone and there she comes to know about Dadi’s sudden death. Abeer is feeling as if she has another burden of death, she is regretting hard not to meet her dadi nor attend her funeral. Abeer’s father is not allowing her to even mourn her dadi’s death with her family.

Junaid keeps calling his girlfriend but she is not picking his call, eventually, she picks up his call and tells him that his wife has badly insulted her and that is enough for her. Junaid is in furious range, his anger is getting out of control. We are fearing that what he is going to do with Abeer. Umair on the other hand is resolute that he will teach Abeer a lesson for what she has done with him. Junaid is in a super angry mood, his anger is getting out of his control and he is driving ends up in a car accident. Will Junaid be able to survive this car accident?

tweet
Share on FacebookShare on TwitterShare on PinterestShare on Reddit
Rameeza NasimNovember 30, 2021
the authorRameeza Nasim
Rameeza Nasim, a Paralian, passionate about poetry, drama and fiction. By giving drama critiques I feel like I am endorsing the writer's message to the audiences, I love my job. Being a critic responsibility lies on my shoulders to point out the flaws and shortcomings of the play be it on writer's , performers or director's end . I did my Masters in English Literature and Linguistics .
All posts byRameeza Nasim