It seems like a nice light hearted romatic serial 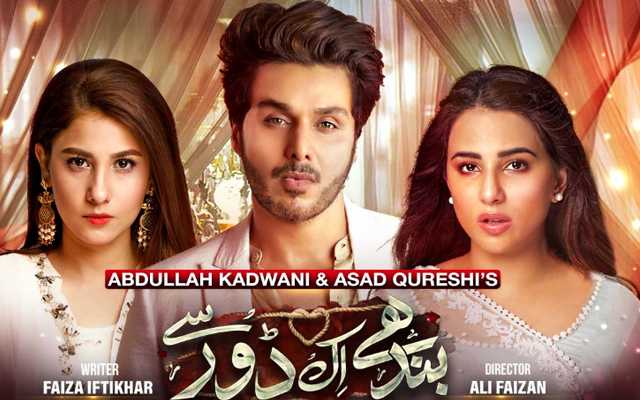 The newly started 7th Sky Production’s drama serial Bandhay Ek Dour Se featuring Ahsan Khan, Ushna Shah, and Hina Altaf seems a promising light-heart romantic serial. In fact, the initial episodes of the play suggest it as being a comedy of errors. The drama seems a breath of fresh air, unlike 7th Sky Production’s other intense and depressing drama serials. The play seems an interesting love story but what is more interesting and entertaining about it, are the brilliant performances by the supporting cast. Writer Faiza Iftikhar has done an incredible job and director Ali Faizan equally well, casting is just perfect.

The story of this play revolves around three main characters Omar, Maheen and Roshni. Omar and Maheen are first cousins and best friends while Roshini is Maheen’s next-door neighbor and her so-called best friend and Omar’s love interest. Maheen is shown as an innocent girl with a pure heart and she is always there to help her cousin in arranging his meeting with Roshini.

Roshni unlike Maheen is quite a flirtatious and mean girl. She and Maheen are poles apart. She uses Maheen for her advantages but she is never been truly grateful to her nor she is caring towards her. In fact, if she gets a chance to step over her she will gladly do for her benefit. She is a little jealous of Maheen when she sees her getting engaged. She is not very seriously involved in Omar and she rather considers him a time pass. Omar on the other hand is damn serious about her and he is making plans to make his Chachi happy so that she is going to suggest Roshni to her mother as a perfect Bahu option which seems an impossible possibility as both the ladies hate each other to bits. Here it seems that Ahsan Khan is a bit overage for this kind of role.

Well, one of the most interesting and entertaining parts of this play is family politics and the arguments by the ladies of the house. We simply love Samina Ahmed taunting Saba Faisal and Saba Faisal taunting her daughter in law. Then Saba Hameed’s bitter remarks and the arguments look so real and bit relatable, although it is quite over the top and it is not something new but still it looks very refreshing and entertaining. Initially, in the serial there is a comic situation created by lots of misunderstandings Omar was mistaking Moonis’s fiance as Roshini that is why it makes the play a sort of comedy of errors. Omar’s bhabi believes that Omar is madly in love with Maheen.

There is an entry of other characters in the play,  Shaista Aunty and his son Nabeel who happens to be Roshni’s mother’s best friend. Maheen starts drooling over Nabeel as he is handsome and rich and it seems that she has immediately dropped the idea of marrying Omar. He forbids Omar not to insist on meeting her. Omar starts taking life serious and he has started working in his father’s office. However, it seems that this is not making Roshni’s heart melt for him as she has completely forgotten Omar and now she is only dreaming of marrying Nabeel. Well, it seems that Nabeel likes her. Nabeel and his mother are inviting her to visit their house. One wonders where this Omar, Roshini, and Maheen’s relationships going to lead?