Dil Mom Ka Diya Episodes 15 and 16 Review: Ulfat has crossed all the limits

Ulfat aborted her child without even asking for her husband's consent 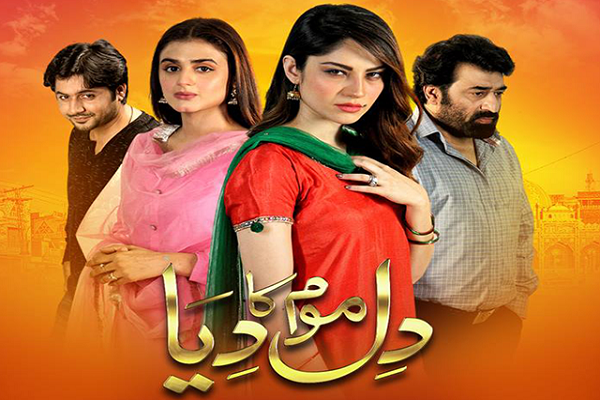 ARY on airs the duo episodes of one of the classiest drama in the running Dil Mom Ka Diya every Tuesday night.The drama is based on family ties and family values; it is all about siblings love and the up and downs of married life, beautifully knitted into a story written by Saira Raza and well executed by the director Shahid Shahfat. Neelam Munir and Yasir Nawaz’s performances are simply outstanding. Imran Ashraf and Hira Mani share an amazing chemistry in the drama, something we watch out for every time we tune in to Dil Mom Ka Diya.

Ulfat is a girl who does not love anyone except her ownself. She does not have any feelings for her own kids particularly her daughter. She is not for a single moment anxious or worried for her injured daughter as she is not over with her own tantrums. Her drama to defame Afzal in front of her parents eyes turns a flop as her parents know her nature very well. Ulfat’s father scolds her in front of everyone but she is so persistent that she does not go along with Afzal.

Ulfat gets extremely jealous on her own sister’s engagement too, she shamelessly asks her father, his reason for marrying her to the aged Afzal and finding young husbands for his other daughters.

Tamkinat for the first time loses her cool as she cannot bear anything when it comes on her character.She directly calls Ulfat a thankless, jealous and self-centered person on which Ulfat get furious and challenges Tamkinat that she should not be happy as Azhar will change too. Tamkinat says that she has blind trust on him. Ulfat seeds Azhar’s mind with doubt, she starts telling him exaggerated stories about Tamkinat’s ex- engagement.

However, what we don’t understand is how Azhar strongly reacts on it. Since he knows Ulfat’s nature, he should have been prepared for it as well. Fortunately Ulfat’s mother takes Tamkinat’s side and she tells Tamkinant that their bond of Nikkah is much stronger than all such petty misunderstandings.

Ulfat’s mother’s character has been portrayed as very positive and God fearing woman. She never sides with any of Ulfaat’s wrong doing but in fact she forbids her. She is extremely embarrassed when she get to know that Ulfat is trying to create misunderstandings between Tamkinat and Azhar. She apologizes from both of them and gives them advice that never let ego come in between yourselves as it breaks hearts and home. Ulfat’s mother tells Ulfaat that creating differences between a husband and wife is a huge sin and is a Satan’s attribute on which Ulfat blows up by saying that “you are calling me Satan”.

Ulfat has literally crossed all her limits this time. She plans to abort her third child without even telling anyone let alone asking for the consent of her husband. The child has been developed so the doctors have refused for the abortion. However, Ulfat finds a way and get his third child aborted without getting it in the knowledge of her husband or even her mother as she does not want keep this child herself. She has committed a huge sin and it seems that she is going to get away with it! Lets see what will happen in the coming episodes.

tweet
Share on FacebookShare on TwitterShare on PinterestShare on Reddit
Rameeza NasimOctober 17, 2018
the authorRameeza Nasim
Rameeza Nasim, a Paralian, passionate about poetry, drama and fiction. By giving drama critiques I feel like I am endorsing the writer's message to the audiences, I love my job. Being a critic responsibility lies on my shoulders to point out the flaws and shortcomings of the play be it on writer's , performers or director's end . I did my Masters in English Literature and Linguistics .
All posts byRameeza Nasim