Ayesha and Basit are getting close 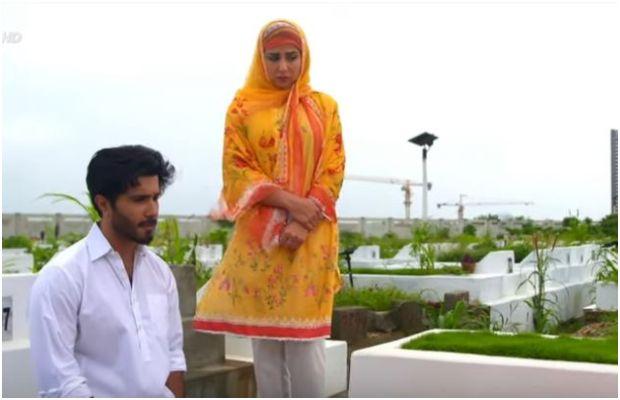 Habs Episode-17 Review – ARY Digital’s drama serial Habs is now 17 episodes down, the play is our favorite in the running. Performances are super brilliant and it is particularly Feroze Khan and Ushna Shah’s onscreen chemistry which lightens up the whole show. In the previous episode, we have seen that Basit is feeling remorse after his mother’s death. In this episode, it is shown that Basit pays a visit to his mother’s grave.

It is shown that Basit and Ayesha are getting close as they sleep in the same room. It is a scene of proximity where Basit is heavily sweating in the middle of the night and Ayesha is by his side to take care of him. It is the scene where we have seen Basit in the most vulnerable state but the good thing is that he confides in Ayesha by telling her that he has seen his mother in the dream.

The office dynamics are not different from what it was at the time of Ayesha. Poor Bano is becoming a victim of office politics. The same office guy who used to gossip about Ayesha is now after Bano. He corrupts Bano’s presentation file but Basit catches him doing that through CCTV footage. He begs Basit not to fire him moreover he begs Bano also to forgive him and convince the boss not to fire him. Anyways the guy is not fired but given a final warning.

Well we are a little disappointed that we get to see no scenes of Fahad and Bano together we so wanted to see their romance brewing, c’mon Bano deserves this. It is so saddening to see her struggling alone. Zoya gets an amazing Bari with expensive jewelry and suits. Zoya is so greedy that she is planning to pack all of them and flee with Aamir. Zoya in the middle of the night is eloping with Aamir with all the stuff when Bano catches her. Will Bano be able to stop her or will she let her go as she thinks that this proposal is not suitable for her?

tweet
Share on FacebookShare on TwitterShare on PinterestShare on Reddit
Rameeza NasimSeptember 6, 2022
the authorRameeza Nasim
Rameeza Nasim, a Paralian, passionate about poetry, drama and fiction. By giving drama critiques I feel like I am endorsing the writer's message to the audiences, I love my job. Being a critic responsibility lies on my shoulders to point out the flaws and shortcomings of the play be it on writer's , performers or director's end . I did my Masters in English Literature and Linguistics .
All posts byRameeza Nasim