Total Cases
|
News Updates
HomeDrama ReviewsMuqaddar Episode-23 Review: There is not a single scene of Sardar Saif and Raima in this episode
Drama Reviews

Muqaddar Episode-23 Review: There is not a single scene of Sardar Saif and Raima in this episode

Hassan is beaten badly by goons of Sardar Saif's wife 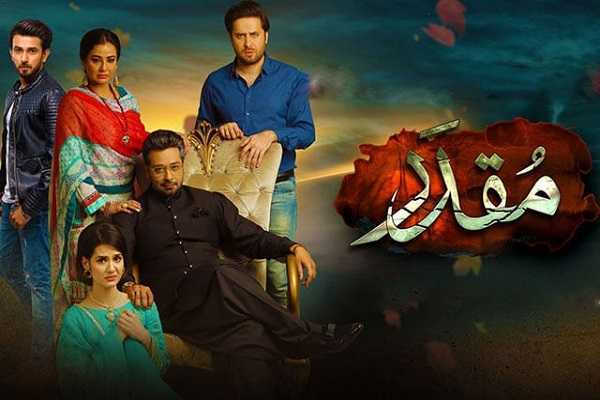 Airing at Geo Entertainment Muqqadar is one interesting watch with its interesting storyline and power-packed performance by Faysal Quershi which simply outshines every other thing in this play, but in these recent episodes, scenes are showing more of Haris and Maha, and Hassan and Abeerah’s track. There is not a single scene of Sardar Saif and Raima in this episode. Well, we are missing Faysal Qureshi’s performance as we love his portrayal as Sardar Saif and we are not much interested in other character’s track.

It is understandable that makers of the play cannot shoot in Europe but they can show one or two scenes in a creative way which may suggest what Sardar Saif and Raima are doing on their trip as being an audience I am so curious to know that what is actually happening with Raima on her honeymoon trip, has her feelings for Sardar Saif has changed? There is no such clue except the conversation between Saad and Sardar Saif’s wife where she mentions that Sardar Saif seems very happy in his video chat.

Haris and Maha’s married life journey begins on a good note although Hari’s heart and soul are not in this marriage however, he is being nice with Maha. Well, it seems that Maha was being nice and caring with Haris’s mother just because she has to win Haris’s heart otherwise she is not that much caring for his parents. Maha and Haris have a very loud argument when Haris tells Maha that he cannot take her on honeymoon and Maha keeps on insisting, she is being little insensitive about Haris’s mother on which Haris gets mad on her and about to slap her.

Well, Maha seems insensitive and stupid, instead of insisting him on the very next day of her wedding she should have waited for a little and should try to build a strong bond with him first. One of the major reasons for Haris declining her to go on the honeymoon is that he does not want to go with her because he is not happy. Had it been Raima he would have happily taken her for honeymoon without even caring about his parents.

Sardar Saif’s first wife is having all the traits of a typical feudal lord wife. She is the one who bribes the newspaper agency for defaming Hassan. Now when she hears Hassan calling Abeerah again, she orders her goon to beat the hell out of him and teach him a lesson that he won’t forget. Poor Hassan and her mother have no choice but to leave the country for their safety. Abeerah is trying to get close to Saad and she has started developing some feelings for him.

Will Abeerah be able to forget Hassan? Or will she be able to give Saad that in place in her heart which she had given to Hassan? Will Raima be back with a changed heart from her honeymoon? Have Sardar Saif and Raima got close to each other during their honeymoon trip? Have they able to develop a strong bond?