Saraab moves around a schizophrenia patient girl who is in love in her imaginative world. 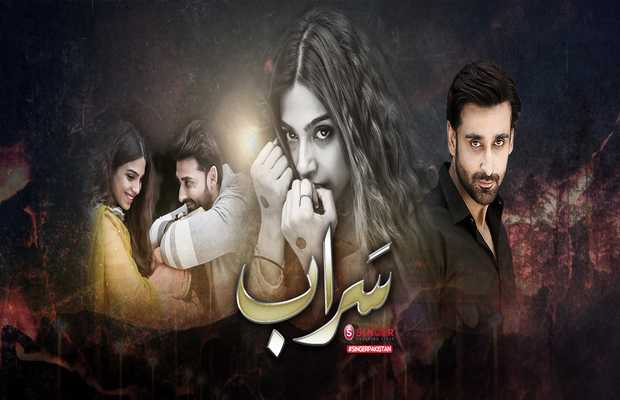 Saraab the newly started drama serial at HUM TV is a production from the makers of Pyar Ke Sadqay and Ishq Zahe Naseeb, the play revolves around a schizophrenic patient and her intense love story. The play is alone of its type where the protagonist of the play is having a serious mental illness, the role of Hooriya, a girl with mental health issues who has created her own world in her mind, is beautifully played by Sonya Hussyn. Sami Khan is playing the role of Hooriya’s cousin and her love interest. The play is penned down by Edison Idrees Masih and directed by Mohsin Talat.

Saraab begins with a surreal scene of Hooriya (Sonya Hussyn) standing at a location with the scenic beauty of a hilly area near a fall then her eyes open, it was a beautiful dream she was dreaming. Then she sees a beautiful rose beside her pillow, she smiles and starts playing around with that rose, and then she places it in her coursebook but then she sees there is no sign of that rose in her book! It was all her imagination! an illusion!

Hooriya’s cousin (Sami Khan) is keenly interested in her and Hooriya passionately loves him too. In her imaginative world and illusions, she has developed a deeper relationship with him which in reality,  he himself does not know. When he meets her in the morning she tells her that he was with her all night and pleads him to go otherwise her sister or mother will see him with her. Her cousin was wondering what Hooriya is talking about.

Hooriya’s mother seems like a typical woman who is keeping grudges with Hooriya’s cousin’s family who happens to be her sister in law too, Hooriya’s sister Nayab also likes her cousin but she has an idea that he is interested in Hooriya. One of the intense and bone-chilling scenes is when Hooriya is having an intense romantic conversation with her cousin on the telephone and when she sees her father she suddenly puts down the phone but her father gets worried as he knows that their phone is not working and when he checks the phone it is still out of order. All that intense romantic talk is her hallucination! Sonya Hussyn’s has done an incredible performance. Here when her father shares his concerns for his daughter with his wife, she tells him that she knows some Peer who can heal this illness with his spiritual powers. It is so common in our part of the world that people do not take mental health seriously and they always confuse it with magic or Jinns influence.

There is also a twist in the play, Hooriya’s eldest sister who is married for years but she is still childless, her mother in law spares no moment to taunt her on her weakness. She wants to marry her second son so that she can see her grandchildren. Hooriya’s sister’s brother in law also likes Hooriya. He shares his interest with his bhabi who becomes worried as she has an idea about her sister’s mental state but when she shares this with her mother she thinks that it is the best idea to marry her off to the house where her sister is there to take care of her. Hooriya overhears this conversation and she is again hallucinating where she shares her anxiety with her cousin and he is assuring her that he will take care of it and he is professing his love to her. What a promising start!

tweet
Share on FacebookShare on TwitterShare on PinterestShare on Reddit
Rameeza NasimAugust 22, 2020
the authorRameeza Nasim
Rameeza Nasim, a Paralian, passionate about poetry, drama and fiction. By giving drama critiques I feel like I am endorsing the writer's message to the audiences, I love my job. Being a critic responsibility lies on my shoulders to point out the flaws and shortcomings of the play be it on writer's , performers or director's end . I did my Masters in English Literature and Linguistics .
All posts byRameeza Nasim