Sitara is being cold with Babar's wife 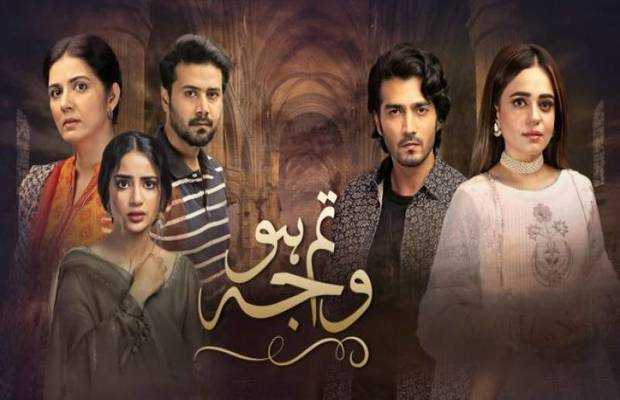 Tum Ho Wajah the drama serial airing at HUM TV has taken a drastic turn, the story is turning more intense and this episode is quite fast-paced. Performances are powerful be it Savaira Nadeem, Saboor Aly, Sumbul Raja, and Ali Abbas all have given their best, but thing is that the play is quite cliched, a typical one with no newness in it. In this episode, Babar brings his wife home telling everyone that he has done Nikkah with her.

The episode begins when Babar enters into the house with his wife, he tells everyone about the nikkah everyone is shocked and hurt as it is his father’s 40th-day Funeral. Chachoo once again tries to fire up the situation but this time Babar’s mother very wisely handles the situation and she open heartily accepts Babar’s wife as her daughter in law despite all odds.

Sitara is very angry, she is hurt that her brother chooses the same day for his nikkah when it is his father’s Chelum. Sitara reminds her mother that Babar has committed the same mistake that Chanda did then why Babar is so conveniently forgiven while Chanda is still suffering. Well her anger is justified but then why she is being rude and cold with her bhabi is not making sense and it is not going well with Sitara’s character.

Babar has no idea that by marrying the girl he has invited troubles to him and to his house. Babar’s wife’s ex-fiance and family invades Baber’s workplace and beats the hell out of his friend and that friend is now so scared that he fires Babar from work and Babar has lost his job as well. Moreover, Babar’s wife’s family is still after him and it seems that they are too furious once they will know about his place they will not shy away to invade his house as well and can harm him and his family.

Chanda on the other hand is getting the worst treatment she has ever imagined in her life by her in-laws even Shahab has turned cold with her. She cannot even attend her father’s Chelum, she is too sad about that but Shahab is not caring for her feelings at all. Shahab’s mother is making Chanda’s life hell, she is burdening her with tons of work not caring that she is pregnant. She is scolding Chanda taking her father’s name on which Chanda gets furious and she retaliates and on which Shahab’s mother plans to teach her a lesson. She in a very smart way tells Shahab about Chanda’s behavior on which he gets mad and he is dragging her down from the stairs when she fell off the stairs and it seems that she has lost her baby.

tweet
Share on FacebookShare on TwitterShare on PinterestShare on Reddit
Rameeza NasimAugust 13, 2020
the authorRameeza Nasim
Rameeza Nasim, a Paralian, passionate about poetry, drama and fiction. By giving drama critiques I feel like I am endorsing the writer's message to the audiences, I love my job. Being a critic responsibility lies on my shoulders to point out the flaws and shortcomings of the play be it on writer's , performers or director's end . I did my Masters in English Literature and Linguistics .
All posts byRameeza Nasim