''Fawad ko mera Hi bolna (Give my regards to Fawad)''. 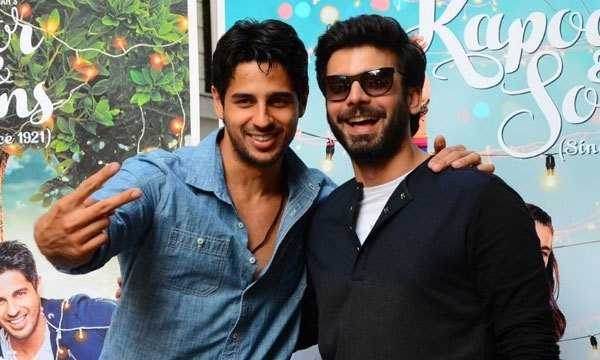 Sidharth Malhotra seemed to be delighted by getting a fan's message from Pakistan - OyeYeah News
0Share
1.26KViews

Sidharth Malhotra sends hello to Fawad Khan in a most unexpected way, as both the actors have worked together in Bollywood movie ”Kapoor & Sons”, and in a middle of an interview Sidhart Malhotra sent his hello to the Pakistani star. While he was being interviewed, the interviewer read him a message from a Pakistani fan.

Sidharth Malhotra seemed to be delighted by getting a fan’s message from Pakistan and he instantly said replying to the fan, ”Fawad ko mera hi bolna (Give my regards to Fawad)”.

When asked upon how he keeps up with the bond formed with Fawad Khan while making the movie, he replied, ” We keep texting each other and yes, we are in touch but it has been a while since I met him.

The message was sent in a tweet by a Pakistani fan who happens to be a girl, she sent a message after watching Sidhart Malhotra’s video clip he tweeted while visiting Wahga border. Though Malhotra’s recently released movie ”Aiyaary”, a patriotic undertone is reported not to get a no-objection certificate NOC for release in Pakistan.

The fan in fact conveyed that hello to Fawad Khan in her tweet, she was also jubilant for her tweet to be noticed and question conveyed to Sidharth Malhotra, her crush.

Despite there is some kind of ban for Pakistani actors to work in Bollywood movies, the actors and fans keep to have bonding together for sure. The art and the artist cannot be held with boundaries.

tweet
Share on FacebookShare on TwitterShare on PinterestShare on Reddit
Saman SiddiquiFebruary 24, 2018
the authorSaman Siddiqui
Saman Siddiqui, A freelance journalist with a Master’s Degree in Mass Communication and MS in Peace and Conflict Studies. Associated with the media industry since 2006. Experience in various capacities including Program Host, Researcher, News Producer, Documentary Making, Voice Over, Content Writing Copy Editing, and Blogging, and currently associated with OyeYeah since 2018, working as an Editor.
All posts bySaman Siddiqui