The Donkey King dethroned Teefa in Trouble as highest-rated TV premiere in history. The film got a whopping 36.8 million impressions. 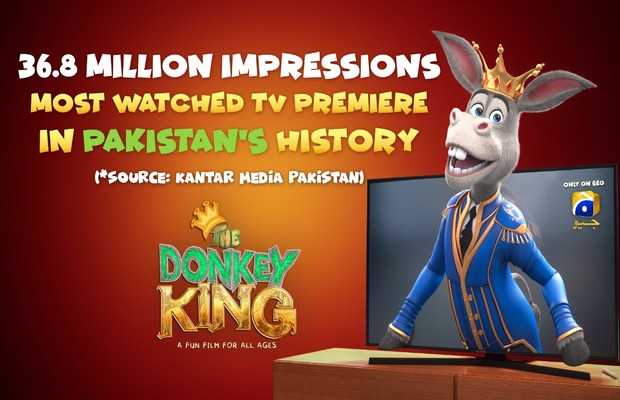 The Donkey King has broken all viewership records during its Television premiere. With cinemas closed this Eid, Geo Entertainment brought cinema experience to home by premiering the film on Sunday, May 24, 2020, at 1900hrs.

According to the TV rating data collected by Kantar Media Pakistan, The Donkey King recorded highest ever rating (GRPs) among cable & satellite audiences of all ages & genders. The Donkey King dethroned Teefa in Trouble as highest-rated TV premiere in history. The film got a whopping 36.8 million impressions.

Commenting on the success of The Donkey King TV premiere, Asad Qureshi, COO, Geo Entertainment said, “Geo laid the foundation for the revival of Pakistani cinema by producing Khude ke liye in the past and now it continues to be the favorite platform for the biggest and best of Pakistani blockbusters. The Donkey King on Geo Entertainment proved to be the most successful TV premiere ever, and we would like to thank our audience for the overwhelming response and appreciation.”

Aziz Jindani, the creator of the film, too commented on the success of TV premiere and said, “We always promised that ‘The Donkey King’ is a film for all ages and the record viewership number of its premiere reaffirms that fact. In particular, it is most gratifying to note that during the film’s premiere, almost every second child in Pakistan who was watching TV at that time was glued to Geo Entertainment, which is not a kids’ channel per se. This presents a compelling case for producing more animated content for TV in the future. Stay tuned!”

With the maximum number of high profile film titles being premiered on Geo Entertainment, we can safely say that Geo Entertainment is the go-to channel for Blockbuster Premieres in Pakistan.

The Donkey King is an animated comedy film that was released in Pakistan in October 2018 and has been produced by Geo Films and Talisman Studios. The film features the voices of Jan Rambo, Ismail Tara, Hina Dilpazeer, Ghulam Mohiuddin, and Jawed Sheikh.