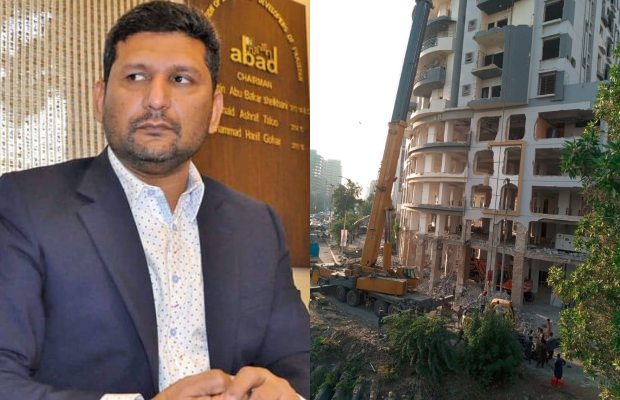 Abad has stopped work on all construction projects in Karachi in wake of the Nasla Tower’s demolition orders.

The Association of Builders and Developers (Abad) announced to halt work on all ongoing projects in Karachi in protest against uncertainty over the future of the housing schemes.

Abad chairman, Mohsin Sheikhani in a statement said that everyone was afraid that their buildings could be demolished in the future.

He added that the builders would have to restore the confidence of the common man and satisfy the investors.

“Tell us from which agency we get permission [for the project] so that there was no action against the builders in the future,” he said, adding: “We have no other choice but to stop work on all projects. We will take our protest to the whole of Pakistan.”

Sheikhani said that the buildings were declared illegal despite the fact that all the relevant documents and NOCs were duly obtained.

While addressing a press conference along with FPCCI officials, Chairman ABAD said that will anyone ask the institutions which actually allot the land as the entire building was not constructed in a day.

Mohsin Shaikhani said that the Chief Minister and Chief Secretary of Sindh should be responsible and urged them to sit with them and collectively take steps for the betterment of Karachi.

Chairman Abad questioned the government that if it cannot run institutions properly then they should be privatized.